AL-KAFI #1667: THE RULING OF A MAKMUM PRAYING ALONE IN THE BACK SAF 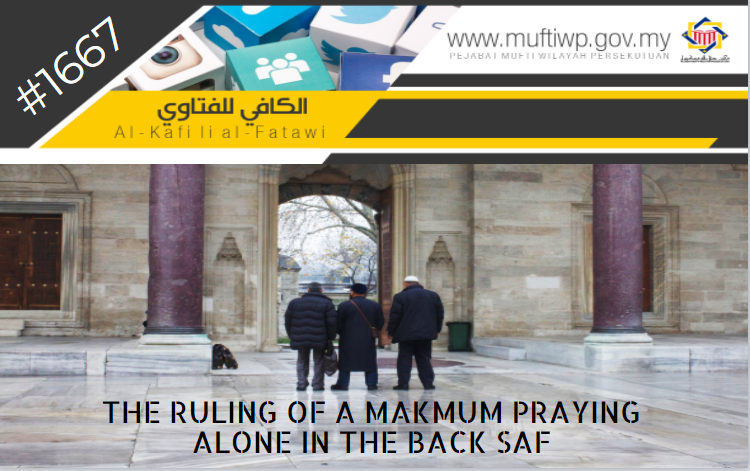 Assalamualaikum wbt. I entered a mosque and found that all the saf are full. Thus, I stand alone behind the last saf which was full and pray alone in the back saf. What is the ruling for my prayer?

Anas reported the Messenger of Allah (ﷺ) said: “Straighten your rows. for the straightening of a row is a part of the perfection of prayer.”

The scholars have differing opinions on this matter and it is divided into two:

The first opinion: The prayer of the makmum is invalid and it is wajib for him to repeat his prayer. This is the opinion of Imam Ahmad, Ishak and al-Nakha’ie.

Imam Ibnu Qudamah said: “And whoever prays behind the saf alone, then he should repeat his prayer for his prayer is invalid.” (Refer Al-Mughni, 2/155). This is according to the hadith of the Prophet PBUH:

“Repeat your prayer; there is no prayer for the one who is behind the row.”

Imam Khatib al-Syirnbini said: “And it is makruh for him (the makmum) to pray alone behind the imam and he should enter the saf if there is space.” This is in accordance with the hadith of the Prophet PBUH narrated by Abi Bakrah RA:

I reached the Prophet (ﷺ) in the mosque while he was bowing in prayer and I too bowed before joining the row mentioned it to the Prophet (ﷺ) and he said to me, "May Allah increase your love for the good. But do not repeat it again (bowing in that way).”

Thus, the hadith shows that the Prophet PBUH did not ask him to repeat his prayer which proves that his prayer is valid. However, the ruling of it (praying alone behind the imam) is makruh which could abrogate the rewards of congregational prayer but does not invalidate prayer. (Refer Al-Majmu' Syarh al-Muhadzzab, 4/298; Mughni al-Muhtaj, 1/558)

Thus, according to madhhab Syafie, in this situation, if we are able to slip in between the people in the saf, then this is what is best. If it is impossible to enter a filled saf, it is sunnah to pull someone from the saf in front to pray together with us in the back. This is on the condition that the person must first perform his takbiratul ihram (starts praying), then pulls someone to the back with him. This is in order to avoid the khilaf of the opinion of some scholars who ruled the prayer of a person praying alone is invalid. While for the person being pulled back, he should cooperate by taking a step back to help his brother out (which is by taking a step back). This is so that he can attain the rewards of helping in piety and doing good. (Refer Mughni al-Muhtaj, 1/559)

After analysing the above discussion, we conclude this issue into several points: