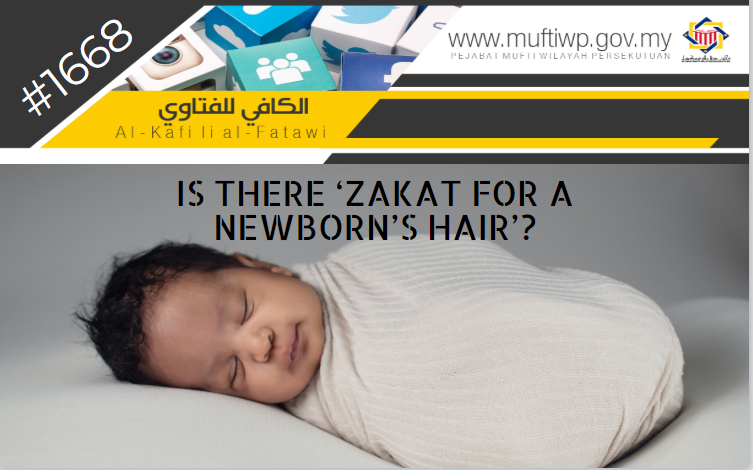 Assalamualaikum. I once heard there is a practice of which the hair of a newborn’s baby is weighed and the value of its weight in gold or silver is donated? Is this considered as zakat and what is the ruling for this?

Hope for an explanation on this matter. Thank you.

The practise of weighing the hair of a newborn is a sunnah encouraged in Islam and not just a custom of our society.

This is in accordance with a hadith from Saidina Ali RA he said the Prophet PBUH performed aqiqah of a goat for al-Hasan and said:

Syeikh al-Mubarakfuri said: This is the evidence that it is sunnah to donate the value of the weight of the newborn’s hair in silver. (Refer Tuhfah al-Ahwazi, 5:115)

We have answered this issue previously, please refer to AL-KAFI #1025: WEIGHING THE HAIR OF A NEWBORN: WORSHIP OR CUSTOM?

Allah SWT has stated the property of which zakat is obligated for them when it fulfils the conditions. The property that is wajib for zakat are the following five types:

Thus, the practise of donating the weight of a newborn’s hair in gold or silver on the seventh day of birth is not categorized as zakat however, it is a sunnah donation. Thus, there is no such thing as ‘zakat for a newborn’s hair’ in Islamic shariah.

The majority of scholars of madhhab Maliki, Syafie and Hanbali hold the opinion that the ruling of shaving the hair and donating the value of its weight is sunnah.

However, they have differing opinions as to the total value that should be donated.

Madhhab Maliki and Syafie state that it is sunnah to donate the weight of the shaved hair in gold and silver. While according to madhhab Hnabali it is according to the value in silver.

If the hair is not shaven, then the weight should be the estimation and it should be donated according to what a person is capable of. (Refer al-Mausu'ah al-Fiqhiyyah al-Kuwaitiyyah, 26:107)

According to the above discussion, we would like to conclude that there is no such thing as ‘zakat for a newborn’s hair’.

There is a practise of weighing a newborn’s hair and donating the value of its weight in gold and silver on the seventh day of birth. This act is sunnah and in accordance with a person’s capability and not wajib. Thus, it is greatly encouraged for those who are capable to do so to showcase his gratitude and happiness to Allah SWT.

May Allah SWT give us sahih understanding in understanding His commandments as well as guide us to perform worship sincerely for Him. Amin.