AL-KAFI #1671: IS IT PERMISSIBLE FOR AN ADOPTED CHILD TO RECEIVE THE INHERITANCE? 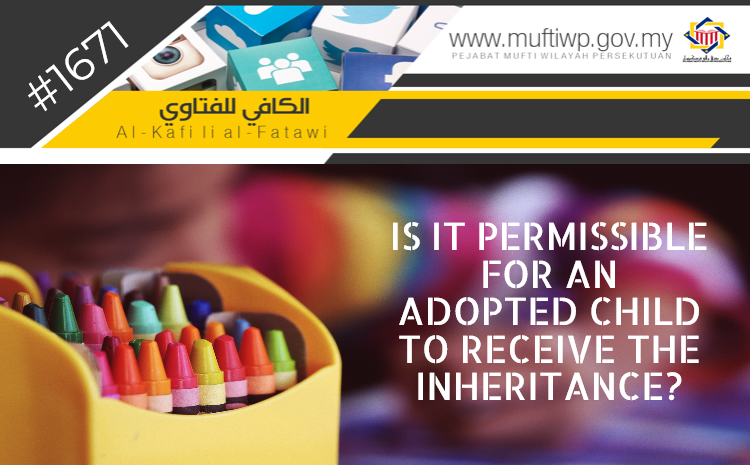 Assalamualaikum ustaz, I have a question, I have an adopted child that I’ve been taking care of since he is a child. The question is, is it permissible for him to inherit my property after I pass away considering that I don’t have any other children? If he cannot inherit my property, what is the best and appropriate solution for this?

We will start with the words of Allah SWT:

Imam al-Qurtubi when commenting on the above verse states, there are wisdoms from the verse; it explains that one of the ‘illah or reason of inheritance is القرابة (al-qorobah) which means family relations. Second, the general meaning for the word قرابة whether it is close or far relations. And third, the generality of all the parts set by Allah SWT. (See Tafsir al-Qurtubi; 5/46)

Coming back to the question presented regarding an adopted child, we should first analyse what is meant by an adopted child and the reasons that permit a person to inherit the inheritance.

According to the 2nd edition of Kamus Pelajar, an adopted child means a child that is adopted from someone else and considered as his own. This means, an adopted child does not have any family relations with his adopted father. In inheritance law or in Arabic known as faraid or mirath, scholars have stated the reasons that permits a person to receive the inheritance of a deceased are:

However, contemporary scholars added one more reason for inheritance and that is he must be a Muslim. (See al-Fiqh al-Manhaji; 5/75)

Next, we consider what is meant by inheritance as stated in the book al-Fiqh al-Manhaji (5/75), inheritance is any property owned that can be divided to anyone who is eligible to receive it after the death of its owner, whether because of family relations or others such as marriage and wala’.

However, not having a right to receive the inheritance does not mean that he cannot accept some of the inheritance through other ways such as hibah and will. Some adopted parents today neglect to take other ways to give their adopted child anything because of their misconception that an adopted child is ineligible and has no right to receive anything after the passing of the adopted parents.

Lastly, we pray to Allah SWT to ease all our affairs in this world and the hereafter, and give us the correct understanding in practising His religion as well as bless all our deeds. Amin.