AL-KAFI #1672: THE STATUS OF MAHRAM WITH MILK-CHILD TO BIOLOGICAL BROTHER 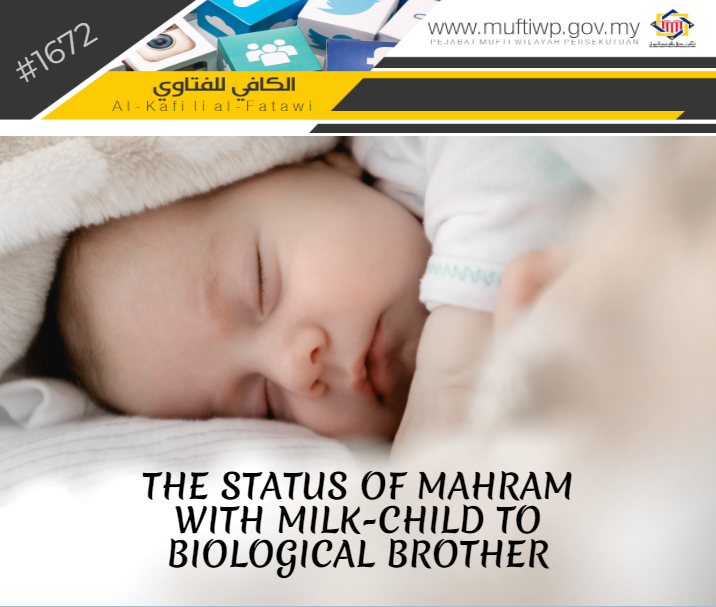 Basically, individuals that are considered as mahram to a man is stated in the saying of Allah SWT:

While for a woman, it applies on the same condition from the verse and we summarize it as follows:

Imam al-Mawardi Rahimahullah cited the words of al-Shafi’e which state:

The original reasons which cause a woman to become mahram to another are two things. Firstly, it is the nasab (lineage) and the second one is asbab (reasons) which are through marriage or nursing. Refer Al-Hawi Al-Kabir, Al-Mawardi (9/196).

Then, Imam al-Mawardi explains further through his words: “Mahram women are in two categories as the following:

First: A section in which is a permanent mahram

Second: The other section is haram to be gathered (simultaneously)”

The implications of mahram in the category of nasab and asbab are as the following:

Referring back to the question presented, we detail these two situations through the following points:

In this context, both adopted sons are in fact the milk-sons of your biological brother. In other words, both are your nephews who are mahram through nursing. As we explained above, nursing makes one a mahram the same way nasab (lineage) makes one a mahram. This is as mentioned in a hadith narrated by Umm al-Mu’minin ‘Aisha R.Anha where she said that the Prophet PBUH said:

As a conclusion, we state here that both milk-sons of your biological brother in this situation in which one is his adopted son and the other is your adopted son is mahram for you which is sabit through nursing. So, the implications of mahram are haram (prohibited) to be married to and it is halal to have physical contact with each other.

Lastly, we pray to Allah SWT to give us correct understanding for us all in religion. Ameen.