AL-KAFI #1675: IS IT TRUE THAT ZUHR PRAYER PERFORMED EARLY ON FRIDAYS IS INVALID? 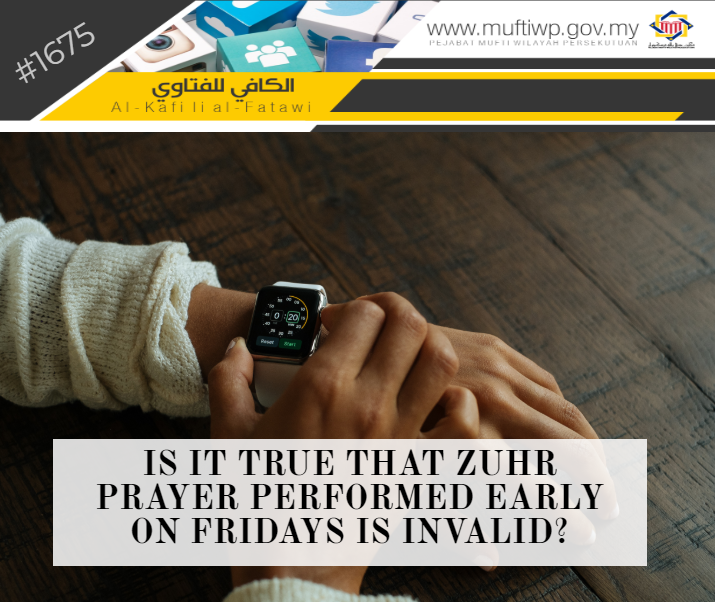 Is it true that Zuhr prayer performed early in the beginning of the time for Zuhr prayer on Fridays is invalid during Movement Control Order for a person who does not perform the Friday prayer? Hope for an explanation.

“It is invalid for those who are not given the excuse of not attending the Friday prayer to perform takbiratul ihram for Zuhr before the imam of Friday prayer gives salam.”

“Each excuse at the same level of severity with the hardships of the sick are valid excuses (according to syarak) through analogical deduction (qiyas) upon the sick which has a clear evidence on the permission. Hence, Friday prayer is not wajib for those who fear of danger upon himself, or property, as narrated by ibn Abbas R.Anhuma where the Prophet PBUH said:

Whoever hears the call and does not come, his prayer is not valid, except for those who have an excuse. They (the Companions) asked: What is the excuse? The Prophet PBUH answered: fear and sickness.

Due to the current situation of the Covid-19 virus outbreak which may cause death, then according to the decision and order of the religious and country authorities, congregational and Friday prayers are suspended to prevent the spread of the disease which is easily spread in a mass gathering. This is one of the forms of excuses as there is a danger to life.

This excuse is explained by Imam al-Khatib al-Syarbini in Mughni al-Muhtaj (1/540-541) when commenting on the matan Minhaj al-Tolibin by Imam al-Nawawi:

“[and it is Sunnah for those probable for their sickness to disappear] before Friday (prayer) ends like sick people with the possibility of being cured, or a slave hoping for his freedom [to delay his Zuhr (prayer) until he lost hope with] having the chance to perform it [Friday prayer] as he may lose his excuse that makes him ahl al-kamal (those who fulfill all conditions of Friday prayer) and this makes it wajib for him to perform it (Friday prayer). Losing hope here is when the imam lifts his head from the second ruku’ according to the asah (strong) opinion. A qil (not strong) opinion: it is when the imam gives salam. This is the opinion of some of the scholars. It is supported in the case of people with no excuse when he performs takbiratul ihram for Zuhr prayer before imam gives salam, then his prayer becomes invalid. This argument is answered by that Friday prayer at that time is wajib, then the hukm (ruling) will not be lifted unless with a certainty, which is different with the situation here. And, the moment of being patient (or waiting) for the Friday prayer to end is as long as the imam does not delay the prayer until time left is enough for four rakaat prayer only. If it is not enough, then it is not Sunnah to delay his Zuhr prayer… If the excused person performs Zuhr prayer before the Friday time ends, then his excuse disappears, and he still has time to perform Friday prayer, it is still not wajib upon him as he already performed the obligatory prayer in its time, unless he is a khuntha (people with both genders), but then it is proven that he is a man. So, it is wajib for him to perform Friday prayer as he is now an ahl al-kamal. If he cannot perform it, he is not sinful as he already performed prayer according to its time.”

Based on the facts and explanation above, we are inclined to say that a person who had already performed Zuhr prayer in his house and does not perform Friday prayer during the Restriction of Movement Order and the order of suspension of Friday prayer by the authorities in each states, it is valid for him to perform Zuhr prayer in the early time on Fridays and he is not subjected under the ruling of makruh or haram. This is because, they are included under the people who have excuses to not attend the Friday prayer. Besides, there is no Friday prayer performed in the area.

May this explanation gives understanding to the one who asks. Let us make du’a to Allah to remove this disease and give us back the chance to perform congregational and Friday prayers. InshaaAllah.