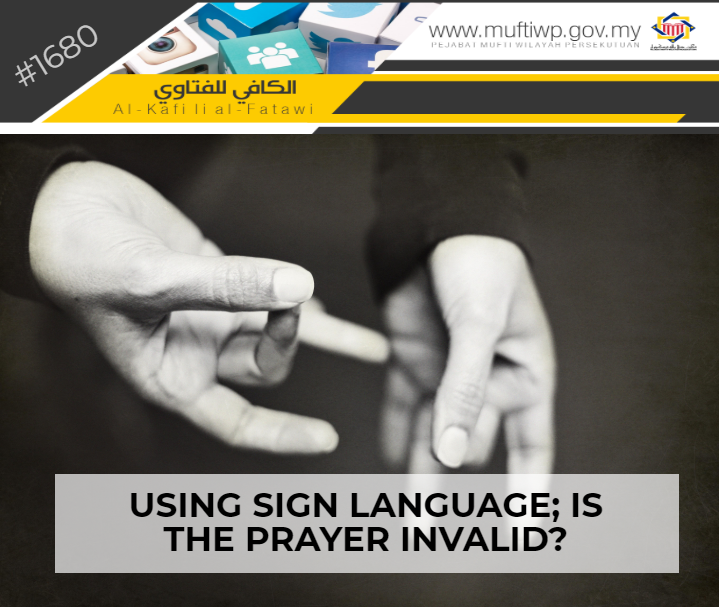 As we all know, intentionally speaking verbally about unrelated matters of prayer will invalidate the prayer. My question is, what about sign language used by a mute person? Does the same ruling apply as if he has spoken verbally?

Sheikh Ahmad al-Zarqa’ explains: Sign language which is usually understood by the mute through any of his body like his hand or head is considered as speech or explanation through words. (Refer Syarh al-Qawa’id al-Fiqhiyyah, pg. 351).

So, originally, the status of these signals is the same as the status and position of words by people who are not mute. However, the scholars give exceptions on this matter for three things, and one of them is language and signs by the mute do not invalidate prayers unlike intentional words which will invalidate prayers. In fact, Imam al-Bujairimi states that if a mute perform sells or buys something using sign language during prayer, the selling and buying are considered valid and his prayer will not be invalidated. (Refer Hasyiyah al-Bujairimi ‘ala al-Khatib 3/497)

In this issue, the sahih opinion in maddhab al-Shafi’e, a qaul in maddhab Maliki, the opinion of the majority of scholars from madhhab Hanbali and a zahir opinion of madhhab Hanafi stated that the mute’s signs do not invalidate prayers. (Refer Raudhah al-Tolibin 1/292; Mawahib al-Jalil 2/32; Kasyyaf al-Qina 1/378 dan Hasyiyah Ibn ‘Abidin 1/433)

To conclude, we state the general Islamic legal maxim which states that the same rulings for speech and words are applicable to sign language of a mute person, but there are some exceptions.