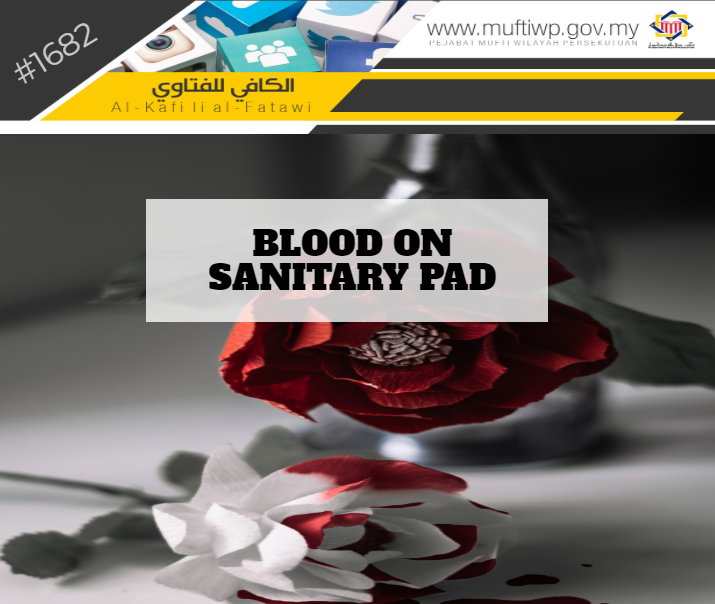 I have a question. There was a time when I was using the same sanitary pad several times before I noticed that there was some blood on it. I’m not sure whether it was my menstruation blood or not. After noticing this, I immediately change my pad. However, what is the status of my prayers throughout this duration?

In our opinion, there are two issues here. First, regarding najis (something that is religiously considered as impure) which is found in a place that is originally pure but then came in contact with najis but is unknown when it actually happened. Another maxim stated:

Imam Jalaluddin al-Suyuti gave an example, a person performs his ablution using water from a well and perform prayer for several days when he suddenly notices that there is a carcass of a rat inside the well. Then it is not wajib for him to replace his prayers, unless he is certain that he prayed with najis on him.

The second issue is if the questioner is certain that she prayed with najis on her, then is it wajib for her to replace the prayers or does it depend on the quantity of the blood? From Ummul Mukminin Aisyah RA, she said:

“None of us had more than a single garment and we used to have our menses while wearing it. Whenever it got soiled with the blood of menses, we used to apply saliva to the blood spot and rub off the blood with our nails.”

“Syeikh Abu Hamid and others answered that a small amount of blood does not obligate for it to be removed and her prayer is valid. Thus, this situation is forgiven. It is not warid that Aisyah washes or purify it with saliva. Thus, it is impermissible for you to claim that it can be purified using saliva. What is meant by the hadith is the blood should be removed so that it is no longer visible but the place is still considered to bear najis. Although, it is forgiven because it is a small amount.”

The meaning of small amount is according to the custom (uruf) of a person and it may differ according to each individual’s perspective. To help in understanding this, scholars have listed the ijtihads issued that can be followed in determining whether the blood is a lot or a little according to uruf.

“What is considered a small or large amount according to the custom is:

According to the above facts and explanations, we are inclined to answer as the following:

Hopefully, this explanation will give an understanding to the questioner. We pray that Allah SWT will give us guidance and inayah to become His knowledgeable slaves and people of taqwa. Amin.