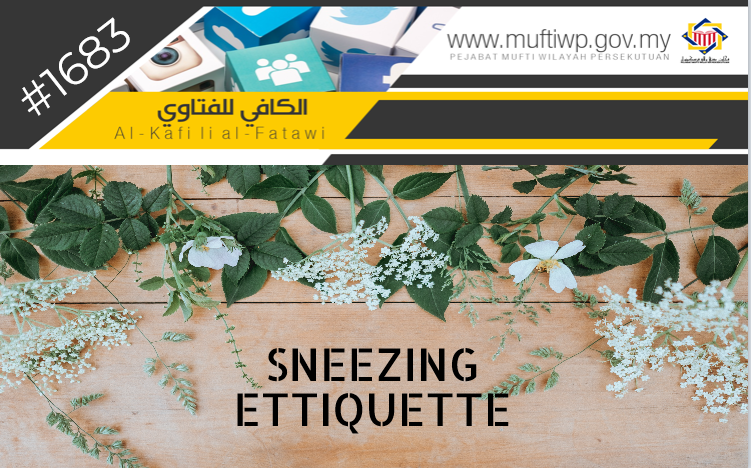 Islam is a religion which emphasizes the importance of everything in our lives from the smallest to the greatest of matters. According to the above presented question, sneezing is a form of blessing that happens naturally to every human being.

Furthermore, Allah SWT loves those who sneezes, for sneezing would remove an illness or disease from his body. This is as stated in a hadith narrated by Abu Hurairah RA, he said the Prophet PBUH said:

Imam Ibnu Hajar cited the opinion of Khattabi which state that the meaning that Allah SWT loves those who sneezes because sneezing would lighten the body and open the pores. (See Fath al-Bari li Ibnu Hajar, 10/607)

This is encouraged in a hadith from Abu Hurairah RA, where the Prophet PBUH said:

"If anyone of you sneezes, he should say 'Al-Hamduli l-lah' (Praise be to Allah), and his (Muslim) brother or companion should say to him, 'Yar-hamuka-l-lah' (May Allah bestow his Mercy on you). When the latter says 'Yar-hamuka-llah", the former should say, 'Yahdikumul-lah wa Yuslih balakum' (May Allah give you guidance and improve your condition).

Furthermore, in another narration by Abu Ayyub, the Prophet PBUH said:

"When one of you sneezes let him say: 'Al-Hamdulillahi 'Ala Kulli Hal (All praise is due to Allah in every circumstance).' And let the one replying to him say: "Yarhamukallah (May Allah have mercy upon you).' And let him say to him: 'Yahdikumullah Wa Yuslihu Balakum (May Allah guide you and rectify your affairs).'"

It is clear that the prophet PBUH encourages his ummah to be mindful of the manners when sneezing by reciting tahmid and for those who hears this to recite tasymit which is to supplicate for goodness on him.

Imam Ibnu Hajar cited the opinion of Imam al-Nawawi saying that scholars have agreed that it is sunnah to recite tahmid as stated by Ibnu Battal and others without the addition of the word Alhamdulillah as stated in the hadith narrated by Abu Hurairah RA. (See Fath al-Bari li Ibnu Hajar, 10/600)

“The one who sneezes may be responded to three times; if he sneezes more than that, he has a cold.”

In al-Mausu’ah al-Fiqhiyyah reciting tasymit literally means supplicating for goodness and barakah. And every supplication of a person for good is considered as tasymit.

Ibnu Daqiq al-A’id said, for some Syafi’iyyah scholars, the recitation of al-Tasymit is repeated if a person sneezes multiple times, unless it is known that he has a cold, then a person should supplicate for him to be cured from the disease. And it is understood that the commandment of reciting tasymit is abrogated if a person sneezes because of a cold. (See al-Mausu’ah al-Fiqhiyyah al-Kuwaitiyyah, 12/25-32; Fath al-Bari, 10/606)

Likewise, the prophet PBUH also advises his ummah to cover their mouths with their hands or a cloth as well as turning away from people or food when sneezing. This is to prevent the infection of diseases to others. Furthermore, he should also lower his voice when sneezing as to not disturb others near him.

In a hadith narrated by Abu Hurairah RA:

“When the Prophet (ﷺ) would sneeze, he would cover his face with his hand or with his garment, and muffle the sound with it.”

In Faid al-Qadir the author cited the opinion of al-Turibishti who said that this is one of the manners for a person who sneezes when there are others around him. When a person sneezes, this would cause discomfort to others who hear or see it. (See Faid al-Qadir, 5/149)

According to the above question and discussion, we would summarize that sneezing is a blessing of Allah SWT for His creations. Thus, Islam taught its ummah to be mindful of the etiquette and manners of sneezing as has been taught by the Prophet PBUH. Hence, in short, if a person sneezes, it is advised to do the following:

Other articles regarding sneezing that you can refer to:

May Allah SWT give us a sahih understanding in His religion and guide us to obey His commandments.