AL-KAFI #1688: STARTING ONE’S TRAVELS AFTER THE TIME FOR PRAYER HAS BEGUN: IS IT PERMISSIBLE TO PERFORM JAMAK QASAR? 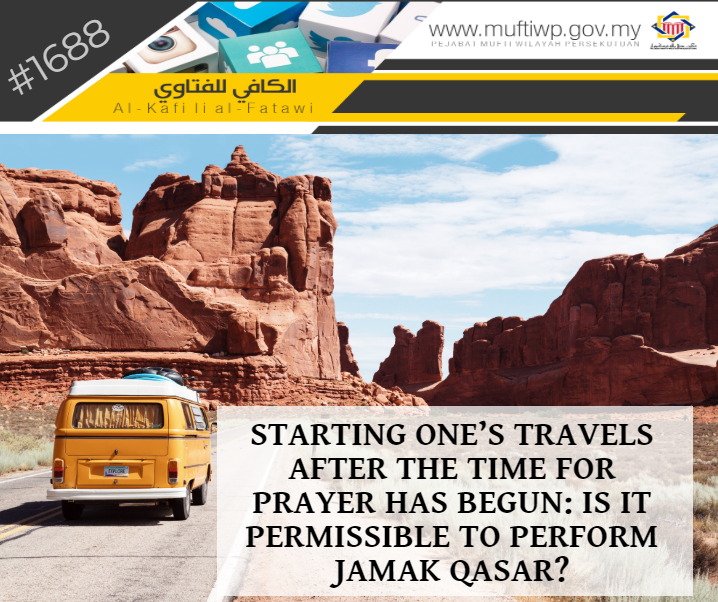 Is it permissible for me to perform prayer for travellers which are jamak and qasar; if I only started on my travel after the time for prayer has started? For example, I live in Seri Kembangan. After the time for Zohor prayer has started, I started my journey to Malacca. When I arrive at R&R Seremban, I performed jamak taqdim prayer and qasar. If this is permissible, is it also permissible for me to perform jamak ta’khir?

There is a khilaf (difference of opinions) on this matter among the scholars. However, the final opinion stated that the rukhsah (facilitation) is permissible for all the above-stated situations. Their dalil (evidence) is the statement of Allah SWT:

“And when you travel throughout the land, there is no blame upon you for shortening the prayer,”

An example is a hadith narrated by Anas bin Malik RA:

“I offered four rak`at of Zuhr prayer with the Prophet (p.b.u.h) at Medina and two rak`at at Dhul-Hulaifa.”

Please note that the distance between the Nabawi mosque and Dzul Hulaifah is approximately seven kilometres.

Thus, jurists set a condition it is permissible to perform qasar for prayer when there is tahqiq (certainty) the traveller has left the area of his residence. Refer al-Mu`tamad fi al-Fiqh al-Syafie (1/470) by Syeikh Muhammad al-Zuhaili.

When the condition of the prayer is a person must leave the area of residence, then the rulings of travel are applicable. According to this fact, then it can be interpreted that it is permissible to perform qasar for a person who went on his travels after the time for prayer begins.

It is stated in al-Mu’tamad:

“If the time for prayer begins before the person starts his journey and it is possible for him to perform his prayer but he chooses to start his travels, then it is permissible for him to perform qasar for his prayer. The reason is the ruling is taken from the time when the prayer is performed not when it is obligated. Thus, it is permissible to perform qasar for a person who performs his prayer when he is travelling. The travel itself affect the number of rakaat to be performed not abrogating the obligation of the prayer. This is the difference with the ruling of when menstruation starts after the time for prayer begins.”

This opinion is disagreed by some scholars. The author of al-Bayan states:

“When the time for prayer begins during hadar (not travelling) and he can fulfil it, but then he chooses to travel, then it is permissible for him to perform qasar. Al-Muzani states: It is impermissible for him to perform qasar. Al-Syeikh Abu Ishak: This is agreed by Abu al-Abbas ibn Suraij, for when a woman finds that the time for prayer has begun during hadar (not travelling) and she can fulfil it, then she menstruates before praying, then the prayer is not abrogated (should be replaced).”

The second issue, if qasar is permissible as interpreted above, then is jamak also included in the permissibility; whether it is jamak taqdim or ta’khir?

The answer is yes, for one of the valid conditions of jamak is the person must be travelling and there is nothing that prevents him from saying otherwise. Syeikh Hasan al-Kaf stated this fact in al-Taqrirat al-Sadidah Qism Ibadah (pg.321):

According to the above facts and explanations, we are inclined to state that the final opinion in madhhab al-Syafie states it is permissible for a traveller who starts his travels after the time for the first prayer begins to perform jamak (for prayers which are permissible to perform jamak) taking the rukhsah (facilitation) of jamak and qasar for the ruling for the rukhsah is applicable when a person is travelling and performing qasar or jamak does not abrogate the obligation of the prayer. However, avoiding the khilaf of scholars is the prioritized way if it is not a necessity. Wallahua’lam.

Hopefully, this explanation gives the answer to the questioner. We pray that Allah SWT accepts our sincere worship for Him in accordance with the sunnah of the Messenger PBUH. Amin.