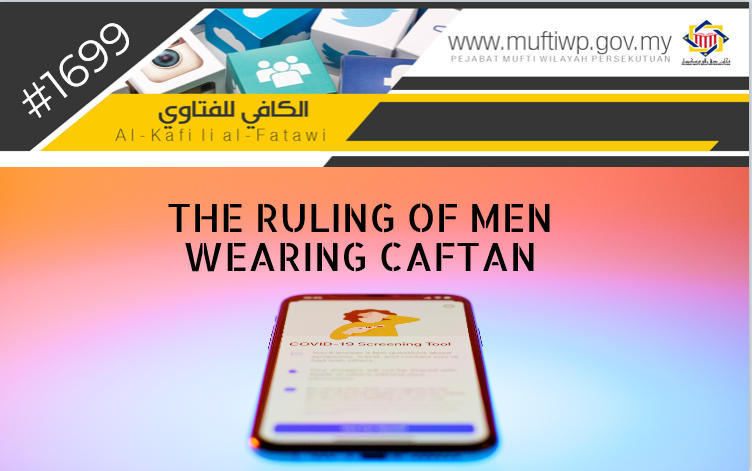 Recently, there is a trend of men wearing their wives’ or mother’s caftans at home. What is the ruling for this? Hope for an explanation.

Wearing beautiful clothing in front each other’s partner for husband and wife is included as a commandment in Islam. This is in accordance with the statement of Allah SWT:

“And live with them in kindness.”

Imam al-Qurtubi when commenting on the above verse cited an opinion which states the meaning of the verse as: “Do something for the wife in return for what the wife did for the husband.” Then, he followed the statement with the words of Ibn Abbas R.Anhuma who said:

“Indeed, I love to adorn myself for my wife the same as I love my wife to adorn herself for me.”

Thus, it can be said that the act of adorning oneself in front of each other for husband and wife in terms of appearance and clothing is something which is commanded according to the above syarak evidence. Although, when we come back to the question presented, we would like to state that there are clear syarak evidence regarding this matter. This is according to a hadith narrated by Ibn Abbas R.Anhuma, where he said:

While Syeikh Badr al-Din al-‘Aini commented on the hadith saying:

(This curse) against the act of a man resembling a woman in terms of clothing and specific adornment such as wearing head covering, necklace, bracelet, anklet and earrings.

Thus, it is clear from the above opinions that the basis for a man is the prohibition against resembling women in terms of clothing, tone of voice, walk and wearing adornments which are usually worn by women that are specific for them. However, the factor of uruf (custom/tradition/the usual) also plays an important role in this issue especially when it is related to clothing. The reason is it is possible for certain places where their clothing for both man and woman is the same. In this matter, it is not included as an act of tasyabbuh (resembling).

Imam al-Nawawi explains the ruling for a man who resembles a woman (tasyabbuh) saying:

To conclude, we would like to state, in the issue of resembling the opposite gender in terms of clothing, it is divided into three parts as the following:

Thus, considering the uruf of our society, we are inclined to state that caftans are clothing which are specific for woman. Thus, it is haram for men to wear it. Furthermore, this prohibition is to close the doors that could lead to the act of tasyabbuh the opposite gender. Wallahua’lam.

Lastly, we pray to Allah SWT so that we are given the correct understanding in practising this religion. Amin.