AL-KAFI #1702: THE RULING OF CALLING THE IQAMAH WITHOUT FOLLOWING THE MOSQUE’S DIGITAL ADHAN CLOCK 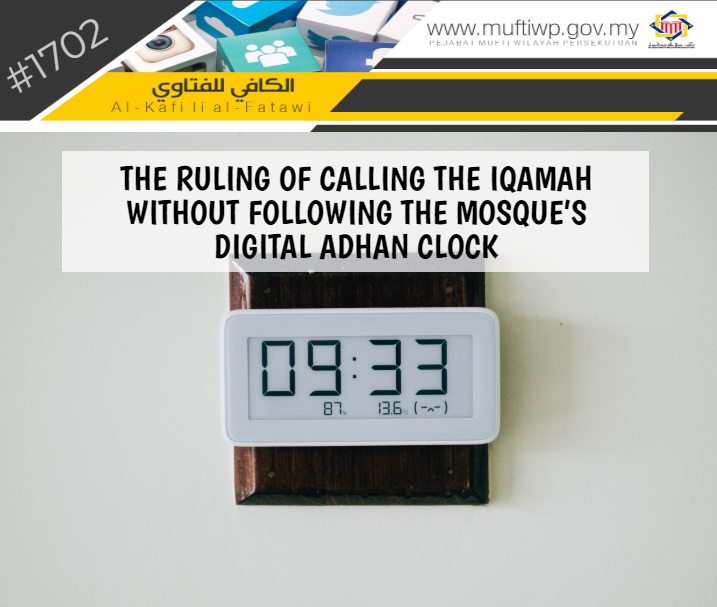 I work as the muezzin in a mosque. In our mosque, we install digital clock which indicates the time for adhan and iqamah. We set the iqamah to be called 10 minutes after the adhan. Normally, we will call for iqamah according to the iqamah time stated at the clock. However, recently, we hire a new muezzin and he keeps on asking to call for iqamah earlier than the time stated at the clock. Consequently, there are complaints made by the people that they missed the fadhilah of takbiratulihram together with the imam and do not have the chance to pray qabliyyah Sunnah prayer due to this because they refer to the digital clock. Is it our fault since we act as the authority at the mosque if we call the iqamah earlier than the time stated by the clock when originally it is the right of the imam?

This question contains two issues to be settled. First, who is rightful to set the time for adhan and iqamah?

It is narrated from Jabir bin Samurah RA where he said?

Jami’ al-Tirmidhi (202). He said that this hadith is hassan.

Narrated by al-Baihaqi in Sunan al-Kubra (2279)

According to Sheikh Ali Syabramallisi, the iqamah is valid even when it is called without the permission of the imam, the one who called for it is not sinful and it need not to be repeated…

The second issue is, is it wrong to call the iqamah earlier from the time stated at the digital clock?

Basically, this should not happen because the time of the digital clock can be changed. It is the responsibility of the mosque authority to make sure the time portrayed to the ma’mum is accurate especially when it is the base of the construction of a mosque and congregational prayer. The authority should be responsible to ease the public so that they may perform their acts of worship in peace and tranquillity. In fact, the presence of the digital clock itself is to tell the ma’mum the time of prayer so that they may be ready before the time. If this purpose fails, it is better to just uninstall the digital clock because it may raise confusion. We already discussed the ethics of a Muslim to save themselves from any false accusation. Among them are:

In conclusion, true are the words of Sayyidina Umar al-Khattab:

Whoever takes the path towards accusation will be accused

Whatever actions with risks of causing accusation should be avoided will all our might because it produces negative outcomes in the short or long term.

Besides, leaving a duration of time between adhan and iqamah so that the people may have the chance to do some Sunnah worships before prayer is a Sunnah. Imam al-Khatib al-Sharbini said:

“And it is Sunnah for the muezzin to leave duration of time between adhan and iqamah by the rate of permitting people to gather in praying area and they have the chance to do Sunnah worships before the obligatory prayers.”

Refer Mughni al-Muhtaj (1/325); Al-Kafi #802: The Ruling of Praying without Iaqamah; Al-Kafi #380: The Muezzin Call for Iqamah Directly after the Adhan

If it is asked on what is the ruling for the mosque authority to call the iqamah earlier than the stated time at the digital clock, according to the above facts and explanations, we are inclined to the opinion that its ruling is makruh because the act is a failure to fulfil the promise to do good without any reasonable excuse. Exceptions are only given when there is a necessity like work to be done rapidly. So, it is not makruh for this case. This is because the imam reserves the right to set the time for iqamah while the muezzin has a right to set the time for adhan, and the need will lift the ruling of makruh.

We reaffirm it is best for the imam to abide by the time set for the purpose of maslahah so that he may not cause a negative environment which affects others. It is also best to have a discussion between the imam and the mosque authority for the goodness of the people who come to pray. At the same time, there are prayers which are Sunnah to be performed directly after the adhan and delayed. Kindly refer to the following articles for further explanation:

May this explanation give understanding to the questioner.