AL-KAFI #1703: IS IT NECESSARY FOR A MUTE PERSON TO MOVE HIS LIPS TO RECITE THE RUKN QAWLI IN PRAYER? 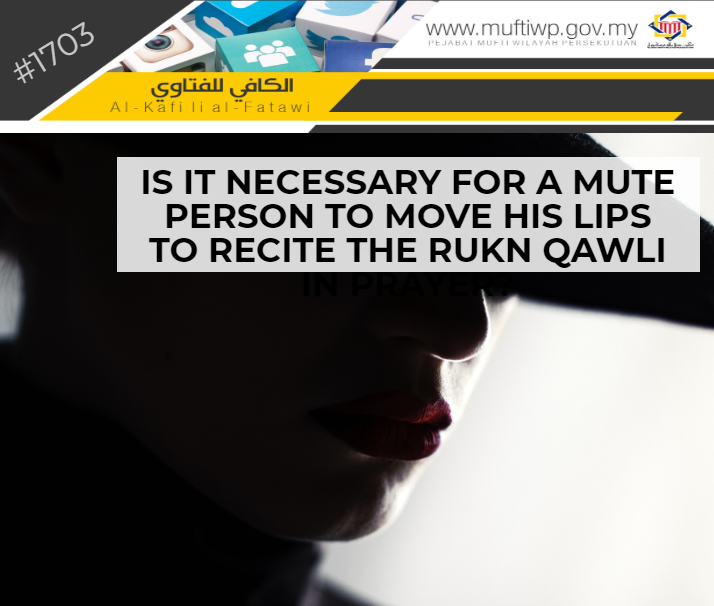 Is it necessary for a mute person to move his lips when reciting the recitation of rukn qawli in prayer? Or is it enough to recite it in his heart only? Jazakallah khair.

Rukn is divided into three which are rukn qalbi (heart), rukn qawli (utterance or recitation) and rukn fi’li (actions). Sheikh al-Sayid Abdullah al-Hadrami states in his book that:

(Rukn) Qawliyah are five things: Takbiratul ihram on the start of prayer, reciting surah al-Fatihah on each rakaat, tasyahhud and salawat to the Prophet PBUH as well as give salam, these three are during the last sitting. (Refer Safinah al-Naja pg. 44)

So, its original rule is wajib to recite these rukn qawli, and the recitation should be heard by the one who recites it himself. Imam Abu Bakar al-Syato al-Dimyati said that: “(And it is wajib to hear) which is the takbiratul ihram by the one who performs the prayer himself, if his hearing is good and is not hindered by any hindrance like loud sound, (for all rukn qawli) from al-Fatihah, the last tasyahhud and salam.” (Refer I’anah al-Tolibin 3/295).

The recitation for mute people

However, Allah SWT will never command something beyond the capabilities of His servants. This is in accordance with the saying of Allah:

The same for the saying of the Prophet PBUH:

On this basis according to Imam al-Nawawi, the ashab of madhhab al-Shafi’e explain that a mute person just have to move his lips with the intention of reciting it enough to the rate for those who are able to recite move their lips. This ruling is applicable for the recitation of al-Fatihah, tasyahhud, salam and all recitations as well as dhikr during prayer. (Refer Al-Majmu’ Syarh al-Muhazzab 3/294 and 394-395).

He should hear (what he recites) by himself, if he has a good hearing, and there is no hindrance to the sound and etc. If he has a problem in words (uttering) or vocally impaired, then he should move his lips enough with what he is capable of. He should move both his lips and uvula within his capacity. (Refer al-Mu’tamad fi al-Mazhab al-Syafi’e 1/241).

However, it is explained by Imam al-Ramli and Imam al-Syarwani that this ruling is only applied to those who vocally impaired after losing their ability to speak before. While those vocally impaired since birth, then they are not obligated to move their lips as they are unable to move it according to the emission points (makharij al-huruf) and the manner of articulation (sifat al-huruf) for the Arabic alphabets. (Refer Nihayah al-Muhtaj ila Syarh al-Minhaj 1/463 and Hasyiyah al-Syarwani ‘ala Tuhfah al-Muhtaj 2/49)

Consequently, we state that for a mute person from birth, he is not obligated to move his lips when reciting the rukn qawli during prayer, and it is also not Sunnah for them to recite other Sunnah recitations.

While for one who becomes vocally impaired or experienced something that results in him losing his ability to speak, he is still obligated to move his lips when reciting the rukn qawli during prayer, and it is sunnah for them when he comes to the Sunnah recitations in prayer to recite it like those who are able to do so by moving their lips to recite it.