AL-KAFI #1714: WHAT IS THE FARAID PORTION FOR A GRANDMOTHER? 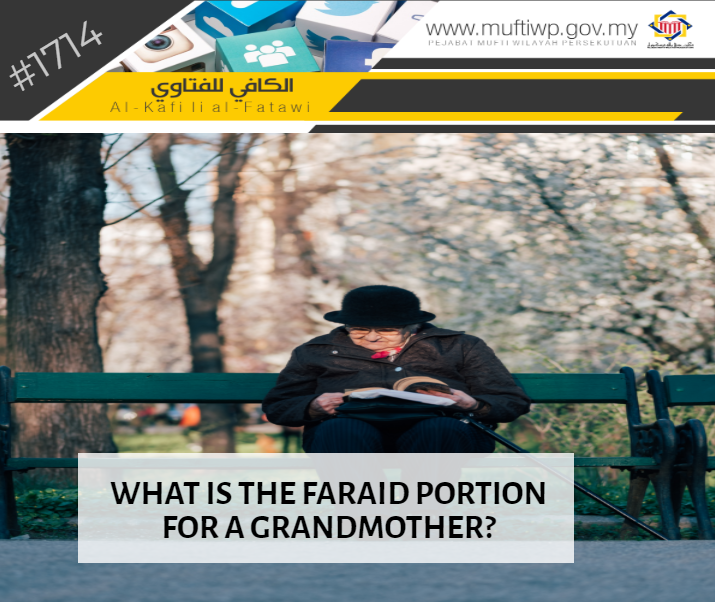 Assalamualaikum w.b.t. I would like to ask on inheritance. My question is, what is the faraid portion for the grandmother if one passes away leaving only a grandmother? Hope for an explanation. Thank you.

We start this with the saying of Allah SWT:

Coming back to the question presented on the faraid portion for the grandmother, the division of inheritance for a grandmother, even if it is not mentioned in al-Quran, it is mentioned in a hadith narrated by Qobisoh bin Dzuaib RA on Sunnah of the Prophet PBUH where:

This hadith clearly shows that faraid portion for a grandmother is one-sixth (1/6). The scholars have reached their consensus (ijma’) that a grandmother will only receive one-sixth (1/6) whether when she is alone or when there is more than one. If it is more, then it is divided equally among them for that one-sixth.

Still, there are some conditions and situations to make the grandmother receive her share of one-sixth. The conditions are as the following:

However, a grandmother takes or replaces the position of the mother with the share of one-sixth only, and it will never change to one third like the condition where the deceased does not leave any child or siblings more than two where a mother will inherit one-third of the property.

Therefore, the condition of the existence of the mother is in accordance with another hadith narrated by Buraidah RA:

In other words, the grandmother; the mother of the father may be blocked by her own son which is the father of the deceased if he is still alive. This is in accordance with the maxim “One who is connected to the deceased through someone, that someone will become a hindrance for him or her (will block him or her from receiving the inheritance).”

In conclusion, a sahih grandmother is rightful for the inheritance and her portion is as mentioned in the hadith which is one-sixth. Lastly, we pray to Allah SWT to give us understanding in His religion, firms our faith, bless us with honesty and strength to worship Him as well as blessings to all our actions.