AL-KAFI #1718: IS IT PERMISSIBLE FOR MENSTRUATING WOMEN TO COOK? 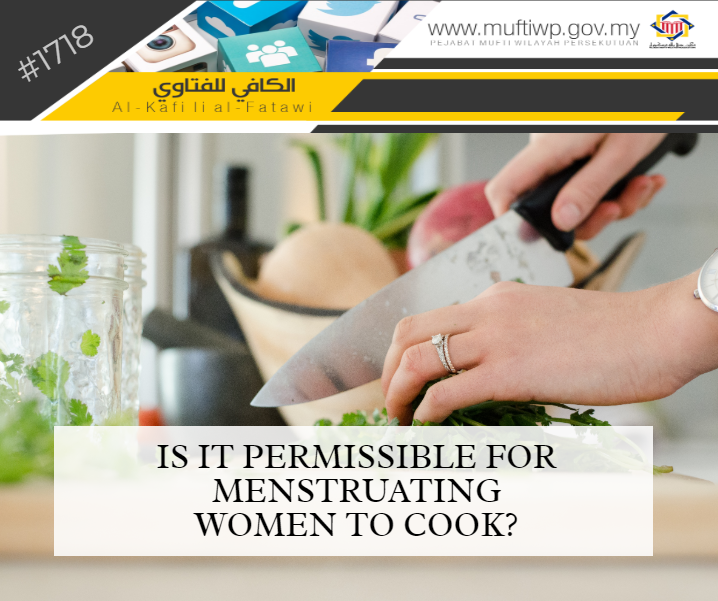 Among the privilege of women is menstruation. It is a natural cycle every woman experience when she reaches maturity. The Prophet PBUH said:

“That is something that Allah, the Mightily and Sublime, has decreed for the daughters of Adam.”

For a woman who is on her menses, she is prohibited from doing some matters which is permissible for her when she is pure. The prohibitions during menstruation are:

All of these matters are impermissible during the fatrah of haid and when she becomes pure again, then it is permissible again as usual.

“For the Jews, when their women are menstruating, they would not eat nor live with them in their houses. Whilst the Christians ruled everything is permissible which includes intercourse. Consequently, the shariah would be destroyed with the stringency of the Jews and the carelessness of the Christians.” (Refer Tuhfah Al-Habib ‘Ala Syarh Al-Khatib, 3/288)

This is according to an incident which is narrated by Anas bin Malik himself where he said:

Among the Jews, when a woman menstruated, they did not dine with her, nor did they live with them in their houses; so the Companions of the Apostle (ﷺ) asked The Apostle (ﷺ), and Allah, the Exalted revealed:" And they ask you about menstruation; say it is a pollution, so keep away from woman during menstruation" to the end (Qur'an, ii. 222). The Messenger of Allah (ﷺ) said: Do everything except intercourse.

Imam al-San’ani said that regarding the hadith which ruled it impermissible to have intercourse and other than this is permissible such as sit with them, eat their cooking and others. (Refer Subul Al-Salam Syarh Bulugh Al-Maram Min Adillah Al-Ahkam, 1/104)

To conclude, it is permissible for menstruating women to cook. Their condition does not prevent them to do other activities such as cooking and others. Syara’ only limits some matters for women during their menses. As for other than these matters, they are permissible.

May Allah SWT give us all the correct understanding of His religion. Wallahua’lam.