AL-KAFI #1723: THE RULING OF USING SOAP MADE FROM THE MILK OF DOMESTICATED DONKEY 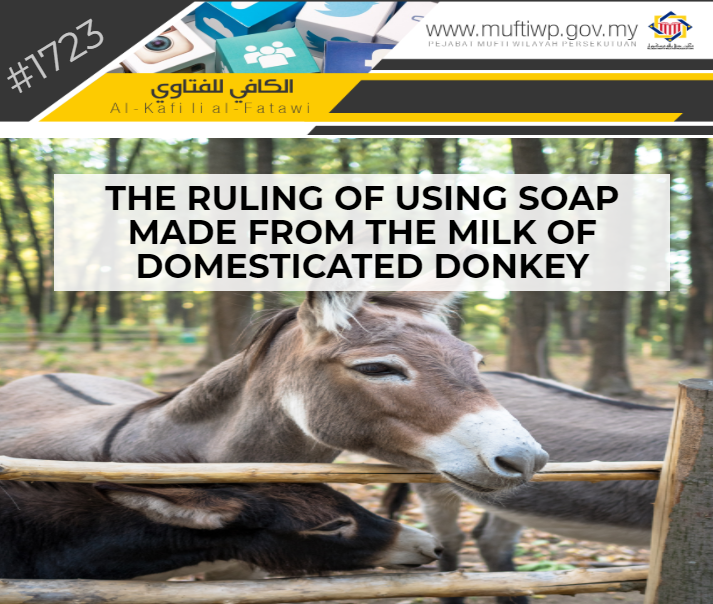 I have a question. It is reported that there is a cosmetic product like soaps of which its main ingredient is donkey’s milk (domesticated donkey). My question is, what is the ruling of using donkey’s milk soap? Is it haram like the ruling of drinking it? Hope for an explanation pertaining to this matter.

We start with narration from Ali bin Abi Talib RA where he said:

'Ali b. Abi Talib reported that Allah's Messenger (ﷺ) forbade on the Day of Khaibar temporary marriage (Muta') with women and the eating of the flesh of domestic asses.

Majority of the scholars among the salaf and khalaf prohibit eating the flesh of the tame donkey (domesticated donkey). And al-Khattabi said that it is the opinion of all scholars (‘ammah al-ulama). (See al-Majmu’ Syarh al-Muhazzab, 9/6)

Questions on the ruling of eating donkey’s flesh whether they are among the domesticated or wild have already been discussed further in these articles:

It is haram to drink the milk from domestic animals

First and foremost, I would like to state here that among the reasons for the prohibition of the domesticated donkey’s flesh is because the donkey itself is considered as najis. This is mentioned in a narration from Anas bin Malik RA which stated that on the day of Khaibar, the Prophet PBUH asked his messenger to say to the people:

"That Allah and His Messenger have prohibited you (from eating) of the flesh of (domestic) asses, for these are loathsome or impure."

The same is where the author of al-Fiqh al-Manhaji and Habib Hassan bin Ahmad al-Kaff stated that animals’ milk which flesh is not halal to be eaten like a donkey (domesticated) and the like is najis. This is because, the ruling of the milk is the same as its flesh, in which his flesh is considered as najis. Therefore, it is haram to be consumed except for human’s milk because even if human flesh is haram to be eaten, but the milk is clean and pure. (See al-Fiqh al-Manhaji, Dar al-Qalam, 1/40; 1/503 and al-Taqrirat al-Sadidah, pg. 128)

The ruling of using milk soap of domesticated animals

Coming back to the question asked, the scholars had discussed this matter in their books which is the ruling of using milk made from impure things. According to the chosen opinion among the scholars of Hanafi, milk made from impure or mutanajjis oil is pure. Therefore, it is permissible to use it as well as selling and buying it. (See al-Mausu’ah al-Fiqhiyyah al-Kuwaitiyyah, 26/301)

The same, the scholars of Shafi’e also agree on the opinion that it is permissible to use soap made by impure milk. Pertaining to this matter, Sheikh Zakariya al-Ansari cited from al-Majmu’ that it is permissible to smear ships with fats of the corpse (of animals), as well as making soap from impure oil, feeding dogs and birds with animal corpses and feeding domestic animals with foods which are affected by najis (mutanajjis). (See Asna al-Matalib, 1/278)

Based on the above discussion and explanation, we conclude that soaps made from domestic donkey’s milk as its main ingredient are permissible to be used whether on the body or clothes. However, it should be cleaned again from the residue of the soap with pure water as understood from the statement of Sheikh al-Ramli.

However, we also would like to suggest that if there is no urgent or important need to use the soap, then it is best to avoid using it as it is closer to the attribute of a Muslim who loves cleanliness and staying away from impurities and najis. Furthermore, soap is among the tahsiniyyat (complementary) and not hajiyat (want) or darurat (need).