AL-KAFI #1725: THE RULING OF TARANNUM IN PRAYER 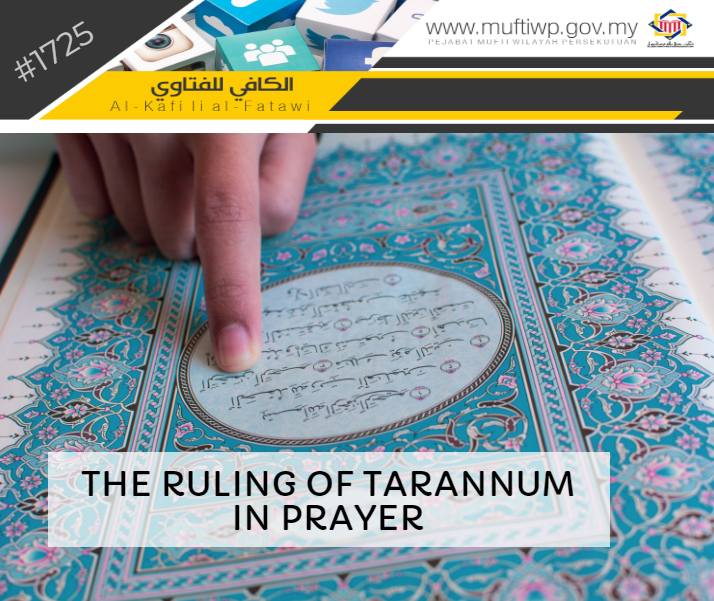 Assalamualaikum. I would like to ask about tarannum in prayer. Some said that it is not encouraged to recite the surah with tarannum in prayer in fear of that there are mistakes in the madd or any other tajwid errors. So, may you explain on this?

Tarannum is an art of recitation or voice which rhythm is varied according to the process of intonation and voice projection in the purpose of harmonising the sound especially in the recitation of al-Quran. It consists of two divisions which are Hijaz and Misri. Both of these are the art of voice with the purpose of harmonising the sound. (Refer the article AL-KAFI #721: THE RULING OF TARANNUM FOR OTHER THAN AL-QURAN)

Imam Ibn Hajar cited the opinion of al-Tabari which states that tarannum will not take place except by voice. When the recitation from a qari is so beautiful, people will be astonished by it. (See Fath al-Bari li Ibnu Hajar,9/71)

Reading al-Quran is a highly encouraged act in the religion and it is really emphasised to read it perfectly with the best recitation. It is clear that the ethics in reading al-Quran is reading it perfectly with tartil which is perfecting the pronunciation of Arabic letters, waqf ibtida’ and etc. This is in accordance with the saying of Allah SWT:

Or add to it, and recite the Qur'an with measured recitation.

Imam al-Qurtubi commenting on the above verse stating, what is meant by reading al-Quran with the measured recitation is clear and go deeper into its meaning. Imam al-Qurtubi cited the opinion of al-Dahhak stating, read letter by letter. Mujahid said (الترتيل) means harmonizing and perfecting its order. (See Tafsir al-Qurtubi, 19/38)

"Allah's Messenger (ﷺ) said, 'Whoever does not recite Qur'an in a nice voice is not from us,' and others said extra," (that means) to recite it aloud."

The same is the other hadith narrated by Abu Hurairah RA where the Prophet PBUH said:

"Allah does not listen to a prophet as He listens to a prophet who recites the Qur'an in a loud and pleasant tone."

Imam al-Nawawi stated that the scholars among the salaf and khalaf decided that it is Sunnah to perfect one’s voice when reciting al-Quran by their voice and attitude. Imam al-Nawawi also said the meaning of (لَمْ يَتَغَنَّ) is not perfecting one’s voice. The scholars state that it is Sunnah to recite it with the nicest voice following its order without crossing the boundary set in reciting al-Quran like the prolonged (madd) until there is an addition or subtraction of any letter. So, the action is haram. (See al-Tibyan fi Adab Hamilah al-Quran, 1/109-110)

In highlighting the valid conditions of recitation in prayer, Dr Muhammad al-Zuhayli states that among them is the correct recitation. And one should make sure the I’rab does not disappear or changing its meaning. Besides, one should beware from committing vocabulary mistakes which able to change its meaning like changing its sign from fathah to dhommah or kasrah. If he does that while knowing, then his prayer is invalidated. And if he forgets, then he should repeat it. And if the vocabulary mistakes or rhythm does not give effect to the meaning of the verse, then his prayer is not invalidated. (See al-Mu’tamad fi al-Fiqh al-Syafi’e, 1/255)

Coming back to the question and the arguments presented, it can be concluded that reciting al-Quran with tarannum and give rhythm to the recitation of al-Quran are encouraged according to the commandment of the Prophet PBUH to recite al-Quran with a sweet voice as the above.

However, imam should be cautious in term of the pronunciation, madd as well as the tajwid in his recitation, so that he will not change the meaning of the verses of al-Quran. The same, it is best for an imam to recite it with tarannum, with tartil and following the condition of the ma’mum, so that he may not confuse the awwam through his recitation. That being said, his recitation should not be too long in prayer that he burdens his ma’mum.

This is as mentioned by Imam al-Nawawi in his book. A matter which is mungkar bid’ah (new invention which is bad) in reciting al-Quran is confusing the ma’mum by his recitation and causes the prayer to become longer which burdens the ma’mum as well as too fast in reciting the verse. (See al-Tibyan fi Adab Hamilah al-Quran, 1/118)

May Allah SWT give us a sahih understanding in His religion as well as taufiq and hidayah to practice His Shari’a accordingly.