AL-KAFI #1729: IS IT PERMISSIBLE TO PERFORM WITR PRAYER STARTING WITH ONE RAKAAT FOLLOWED BY TWO RAKAATS? 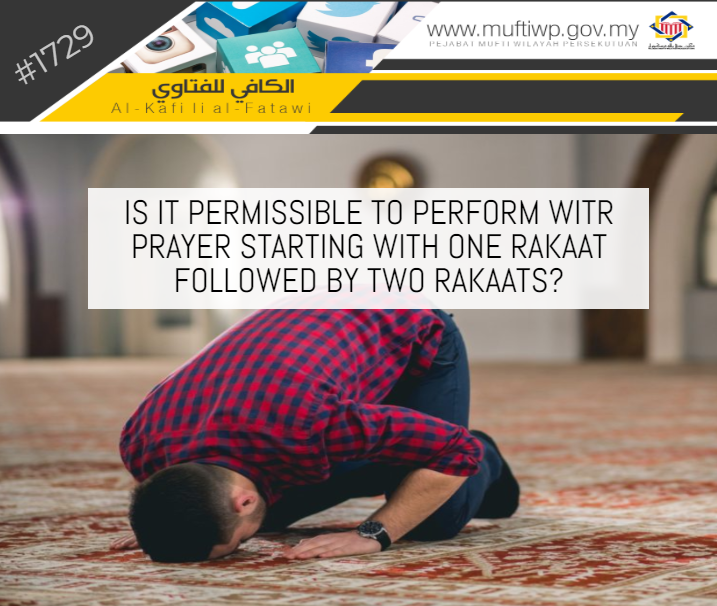 Assalamualaikum ustaz. In a situation when praying three rakaats witir prayer in congregation, the imam performs one rakaat first, then it is followed by two rakaats. Is this permissible?

The phrase witr or pronounced as وَتْر / وِتْر watru and witru literally means single (odd numbers) which is the opposite of the phrase syafa’ (even numbers). While technically, it means: “A specific prayer performed in a specific time as the closing of the night prayers, whether it is done in the beginning, middle or end of the night”. The numbers of its rakaat is odd numbers and that is why it is named as witr.

Witr prayer is an ibadah which is highly encouraged upon each Muslim. This can be seen through several narrations which state the commandment and encouragement to perform this prayer. Among them is a hadith narrated by Abu Hurairah RA where he said:

My friend (the Prophet (ﷺ)  advised me to observe three things: (1) to fast three days a month; (2) to pray two rak`at of Duha prayer (forenoon prayer); and (3) to pray witr before sleeping.

Coming back to the question presented, we state that witr prayer is the last prayer of the night. This is according to several hadith as narrated by Abdullah ibn Umar Ra where the Prophet PBUH said:

"Make witr as your last prayer at night."

It is also according to a hadith narrated by Ibn Umar RA where the Prophet PBUH said:

Witr is a rak'ah at the end of the prayer.

It consists of pairs of rak'ahs, but if you apprehend morning, you should pray one rak'ah and make the end of your prayer as Witr

Based on the above narrations, witr prayer is the last prayer. This means, for those performing witr prayer with three rakaats by separating between two rakaat syafa’ and one rakaat witr, it should be done by performing the syafa’ first followed by the witr.

In conclusion, after analyzing the above texts and arguments as well as referring to the definition of witr prayer mentioned, we state that witr prayer by performing one rakaat first followed by two rakaats contradict the Sunnah. This is because, when one intends to perform witr prayer, then surely the prayer will end with witr and not syafa’ (which is two rakaats). In fact, if witr prayer is ended with syafa’, this clearly refute the true meaning of witr prayer itself. Wallahua’lam.

Lastly, we pray to Allah SWT to give us true understanding in religion. Ameen.