AL-KAFI #1738: THE STATUS OF ROTI TELUR (ROTI CANAI) MADE BY UNWASHED EGGS 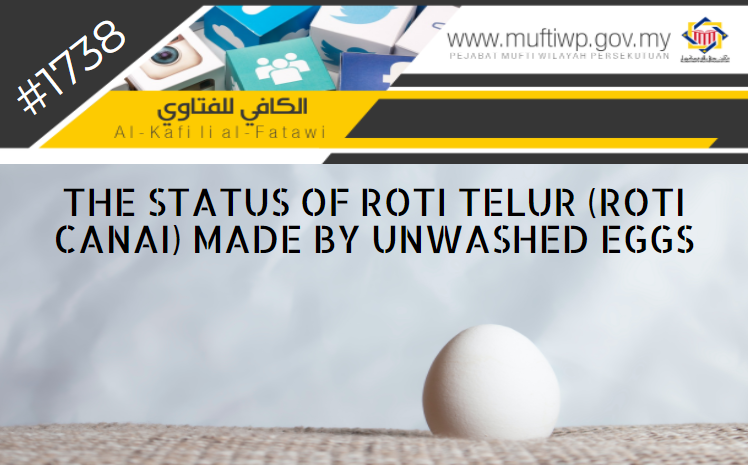 Assalamualaikum. I am a bit worried about those roti canai sellers who made the dough with unwashed eggs. Surely, najis on the eggshells will fall on all roti canai he made. The question is, what is the status of foods affected by najis? Hope for an explanation from SS Mufti. Thank you.

Roti canai made by unwashed eggs is halal to be eaten as long as there is no apparent najis on the eggshells which is then transferred to the dough. If it is clear that there is najis on the eggshells and is transferred to the dough, so it is ruled as najis and haram to be eaten. This is because the food is dirty and does not comply with the concept of halalan toyyiban (halal and good). Therefore, Muslims are prohibited to eat from all types of food which are affected by najis.

Basically, roti canai made by unwashed eggs is halal to be eaten even if the person who makes it touches the eggshells then kneads the dough. That is as long as there is no najis on the eggshells which then is transferred to the dough. The matter had been discussed by us in our previous article:

We start with stating that the animal faeces is najis whether it is permissible to be eaten or not according to madhhab al-Shafie. This is due to the general meaning of hadith narrated by Abdullah bin Mas’ud RA:

The Prophet (ﷺ) went out to answer the call of nature and asked me to bring three stones. I found two stones and searched for the third but could not find it. So took a dried piece of dung and brought it to him. He took the two stones and threw away the dung and said, "This is a filthy thing."

Imam al-Nawawi said: “Verily, in our madhhab (Shafie), all animal faeces, bird faeces and urine are najis whether it is coming from the animal which is permissible to be eaten or not. (Refer: al-Majmu' Syarh al-Muhadzzab, 2/550).

Next, halal food must be pure. This is based on the phrase halalan which is followed by tayyiban in His saying:

O mankind, eat from whatever is on earth [that is] lawful and good

Imam Fakhruddin al-Razi in his tafsir while commenting on the above verse on the meaning of al-tayyib said:

“Which is pure and clean from any najis and prohibition”. (Refer Tafsir al-Thabari, Ibn Jarir al-Thabari (3/301). Therefore, it can be understood that the phrase al-tayyib means pure as the characteristic of foods that are halal.

Next, Allah prohibits all sorts of impurity and filthiness. This is in accordance with the saying of Allah SWT:

and prohibits for them the evil

Imam Fakhruddin al-Razi gives his interpretation on the phrase al-khabaith on the stated verse which means:

Based on the above evidence and arguments, it can be concluded that the concept of halal is bind with tayyiban which is clean and pure. While something is considered haram due to its unclean and filthy nature other than having evidence on its prohibition.

Coming back to the presented question on those who make roti canai using unwashed eggs. When the najis left at his hand affects the dough, surely, the roti canai is affected by the najis. Therefore, we are of the opinion that the food becomes unclean. So, it is not halal to be eaten due to being impure or in other words, do not comply with the concept of halalan tayyiban as discussed. In fact, there is evidence on the prohibition of all unclean things as presented.

Hence, we would like to advise all Muslims and food sellers to always preserve the cleanliness when preparing, storing, processing, packaging the food and etc. A Muslim should be particular in choosing the food that he eats so that it will give calmness to his soul and affects his ibadah positively. Lastly, may we all be away from prohibited things and the syubhah. Ameen.