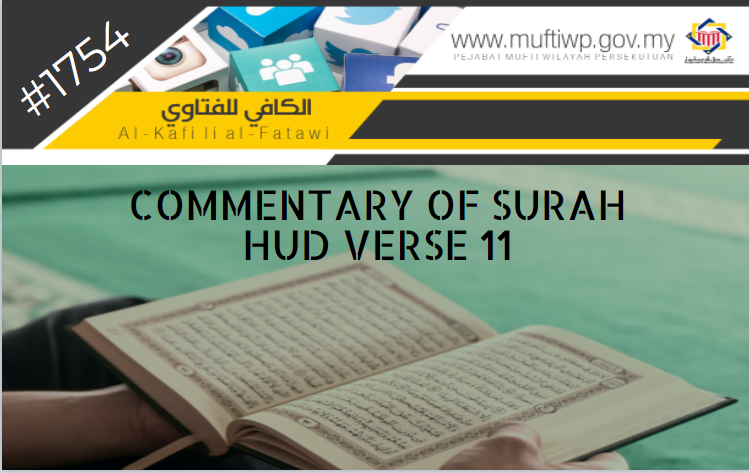 Assalamualaikum. The Honourable Dr, I would like to ask on the commentary of Surah Hud verse 11. Thank you.

Except for those who are patient and do righteous deeds; those will have forgiveness and great reward.

Surah Hud verse 11 states that among praiseworthy actions of the believers are those who have patience when facing tests and hardships, as well as those who are grateful of all blessings and prosperity given to them. And this is one of the characteristics of the best of human; the Prophet PBUH as well as the believers who always seek for Allah SWT’s pleasure.

As a servant of Allah SWT, His pleasure is the main purpose of life in the hereafter. Hence, when facing challenges and tribulations in the pursuit of Allah SWT’s pleasure and forgiveness, patience is the key element. The Prophet PBUH and his companions had gone through all sorts of tests and hardships during the early ages of Islam in Mecca and they always had patience in facing it. This example should be an example to the ummah of Prophet Muhammad PBUH and it is the character of the believers in the pursuit of Allah SWT’s pleasure and forgiveness. This is as mentioned in al-Quran from the saying of Allah SWT:

And those who are patient, seeking the countenance of their Lord, and establish prayer and spend from what We have provided for them secretly and publicly and prevent evil with good - those will have the good consequence of [this] home –

Coming back to the above presented question, for a better understanding, it is best for us to look into the verse before it, in which Allah SWT portrays those who are in despair and are not grateful when being tested by Allah SWT after indulging on the ni’mah and it is reprehensible to Allah SWT. It is as mentioned in the verse 9 of Surah Hud. Allah SWT says:

And if We give man a taste of mercy from Us and then We withdraw it from him, indeed, he is despairing and ungrateful.

Imam Ibn Kathir stated in his tafsir, the above verse indicates that Allah SWT states that there are among humans who possess very reprehensible character, except those who love Allah SWT which are the believers. They (with reprehensible characters) are those who were given pleasures, but then are tested by the loss of those blessings. Due to that, they are in despair and lose hope towards Allah SWT. (See Tafsir Ibnu Kathir, 4/309)

Exceptions are given to those who have patience and are grateful of tests given by Allah SWT. Those with patience when tested are also promised with forgiveness and big rewards from Allah SWT. This is mentioned in Surah Hud verse 11. Allah SWT says:

Except for those who are patient and do righteous deeds; those will have forgiveness and great reward.

Dr. Wahbah al-Zuhayli states in his tafsir upon the above verse that Allah SWT exempts the believers from reprehensible behavior as when they are in hardship and ease, they are grateful, and they are also doing good deeds in the world. So, they are promised with forgiveness by Allah SWT due to their patience and good deeds. They are also given tremendous rewards like residing Paradise on the hereafter. (See al-Tafsir al-Munir li Zuhaili, 12/30)

It is undeniable that Allah SWT with His mercy will always be with His servants who always have patience and grateful of tests and blessings given by Him that even when he is tested with his hand is prickled by a thorn, he will still receive reward due to this. This is as mentioned by the hadith narrated by Abi Said al-Khudri and Abu Hurairah RA where the Prophet PBUH said:

"No fatigue, nor disease, nor sorrow, nor sadness, nor hurt, nor distress befalls a Muslim, even if it were the prick he receives from a thorn, but that Allah expiates some of his sins for that."

Hence, coming back to the above presented question and excerpts, it can be concluded that Surah Hud verse 11 states that among the praiseworthy character in the believers are they always have patience in facing test and challenges, as well as they are grateful of all blessings and ease given to them. And this is among characters possess by the best of human which is the Prophet PBUH as well as the believers and those who are seeking for Allah SWT’s pleasure. This is as taught by the Prophet PBUH in the hadith narrated by Shuaib RA where the Prophet PBUH said:

Conversely, Allah SWT also explains on the verses before which are the verse 9 and 10 of the same surah on the reprehensible characters of those who are blessed with some blessings, but are not grateful. And when all are taken from them, they be in despair.