AL-KAFI #1756: THE RULING OF A FINANCIER CLAIMING INVESTMENT CAPITAL AFTER THE BUSINESS FACING LOSS 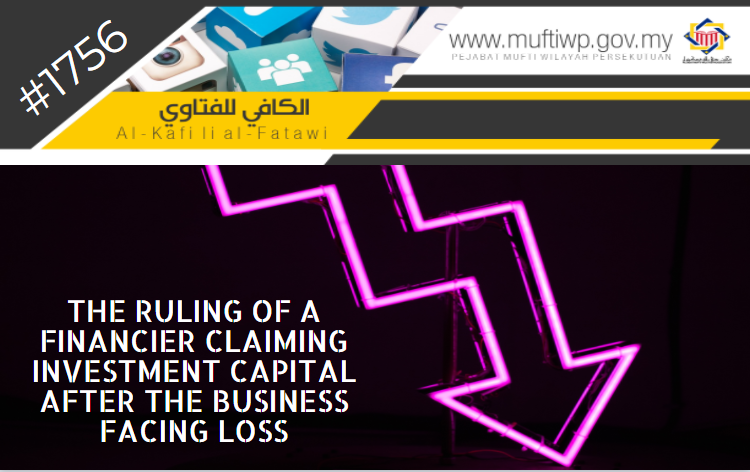 Assalamualaikum SS Mufti. I was involved in a business of selling food for pets. On 2010, my friend was interested to invest his money amounted RM10,000 towards my business. In the agreement, it is stated that the financier will be given a fixed profit of RM300 per month. Unfortunately, after some years, our business started to fall and the profit decreases to the extent that we officially lose our business in 2016.

Not long from that, my friend claimed the capital money in full amount. However, I feel that supposedly, in business, it should be in the concept of “profit with profit, loss with loss”, but in this matter, it seems like I am the one bearing all the loss. Hope for an explanation from SS Mufti.

In a contract of investment, if a business faced loss that causes them to lose the whole amount of capital money, then the loss will be bear fully by the financier and he has no right to claim back the capital money from the operator (al-mudarib) or the worker. This is because the operator also faces a loss in term of time and force spent.

The above situation is closely related to the scholars’ discussion in the chapter of investment or mudharabah. Investment means a financier gives a certain amount of property to be invested by an operator and the profit will be shared together. There are two parties which play the main role in the contract of investment which is financier as the party who invests the capital money while the operator as the party who musters his effort and energy to ensure the investment provides them with profit and gain.

In an investment contract, each investor and operator should know the profit rate as agreed earlier when the agreement is done. (for example, 1/3 is for the operator, 2/3 for the financier) or in percentage (for example 40% for the operator, 60% for the financier) and etc. In other words, it is invalid if the profit is set in an amount and numbers which are not specific like RM100, RM1000 because there is a possibility that profit gain does not reach the specific numbers or that is all.

Basically, the scholars set that if a business faces loss that causes deficit towards the capital money or the merchandise is not sold, then the loss of the capital money shall be bear fully by the financier. In fact, if the operator is tied with the condition of bearing the loss, then the investment contract is considered annulled.

This opinion also aligns with the Fiqh maxim which states,

“Risk (loss) is in concordance with the profit”

In an investment, both parties shall be ready to bear the risk of loss in which the financier may lose his capital money while the operator will lose his time and effort. It is unlawful for only a party bears the risk and loss while the other party only enjoy the gain. This clearly contradicts with the concept of helping and cooperating each other which is nurtured by Islam through the investment.

Based on the above situation, the retail business faces loss and bankruptcy, at the same time, the financier claims back his capital money. In this matter, there are two conditions:

First: If the asset remains, the operator shall liquidize it by selling items bought using that capital money, and the sales money shall be returned to the financier in cash form. The sale of the items is considered as new capital money. (Refer: al-Mu’tamad, 3/295)

Lastly, may we all understand and comprehend the basic principles in Islam especially in the chapter of muamalat to be free from succumbing in matter prohibited by shara’.