AL-KAFI #1757: THE RULING OF SELLING AND PURCHASING MYSTERY BOX 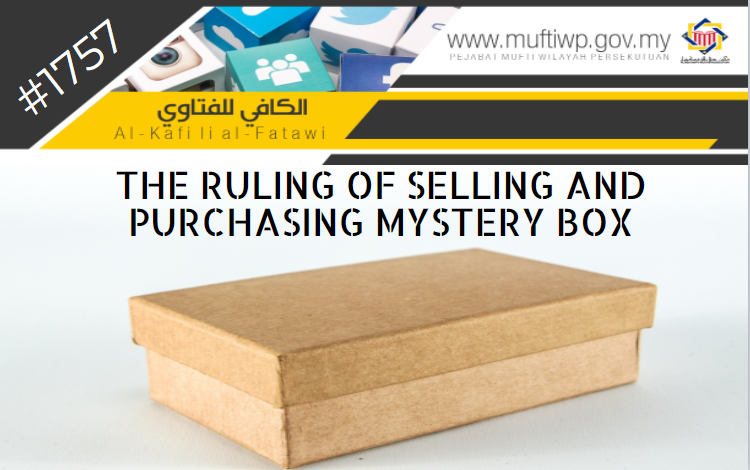 Assalamualaikum. I have a question. Recently, there is a trend of selling and purchasing stuff named Mystery Box in Shopee platform. My question is, is it permissible for Muslims to get involved in the transaction by the fact that the buyer does not know in certain what stuff will he get? Hope for an explanation.

Such trade is impermissible and annulled in the eyes of Shara’ because it does not fulfil the basic requisites and conditions of sales and purchase which is the merchandise must be known and stated of its type in specific accepted by the local.

As an alternative, if there are some difficulties in returning the item as it has been used or the like, then a new sales and purchase contract shall be made based on the item received with the condition that the buyer agrees to buy it and the seller also agrees with the price given.

As a brief visualization, Mystery Box is a product which item is not known in specific. It is sold in many platforms like Shopee, Lazada and etc. It is also known by other names like ‘Kotak Teka-teki’ and the like. Its typical modus operandi is; the customer will buy an item named mystery box. The branding is named due to that the buyer has the potential to win a munificent product like smartphone with high specification, branded cosmetic products and many more with low amount of price.

At the same time, if the customer is unlucky to get the bountiful product, they will be given other stuffs as a replacement of that with lower value from the one he wishes for, or even, it is possible for him to get an item of a very low value in compared to what he invested [1].

Basically, to state whether a trade or business is accepted by shara’, it shall comply and fulfill requisites and basic conditions set by shara’.

Requisites of selling and purchasing are:

Even if it is not conditioned to know all aspects to the tiniest details of the item, it still shall be known of its basic information related to the item like the type of the item, its characteristics, shapes, and etc. It is not allowed to sell item which is not known of its essence and physical aspect like saying “I sell one of the clothes in that box” because such business has the element of excessive vagueness (fahisy) and may lead to enmity and animosity between seller and buyer.

Basically, sales and purchase of unspecific item has the element of gharar which is prohibited in Islam based on the hadith of Prophet Muhammad PBUH as narrated by Abu Hurairah RA:

Abu Huraira said that God’s Messenger forbade a transaction determined by throwing stones, and the type which involves some uncertainty

Next, an item is considered known when it fulfils several criteria. The main point is the item is already seen and chosen by the customer himself in specific. Due to that, according to madhhab al-Shafi’e, sales and purchase done by a blind man is invalid unless it is represented by other person of healthy sight because the element of vagueness is very clear and excessive.

In addition, this sales and purchase has the element of gambling due to the dependency is solely on luck. The concept brought upon denies the rights of the buyers to choose item that he wants and likes reasonable to the price paid. Hence, this situation contradicts the principles of sales and purchase which should take place like khiyar (choice).

As an alternative, if there are some difficulties in returning the item due to it is already used or the like, then it is suggested for both parties to make a new contract of sales and purchase with the condition that the buyer agrees with the purchase and the seller also agrees with the amount of payment received.

Lastly, Muslims shall evade themselves from being deceived by any form of businesses with clear vagueness even one is promised with something bountiful as that doing may cause them to succumb in matters prohibited by shara’.