AL-KAFI #1760: THE RULING OF IMPOSING OTHERS TO SELL THEIR LAND 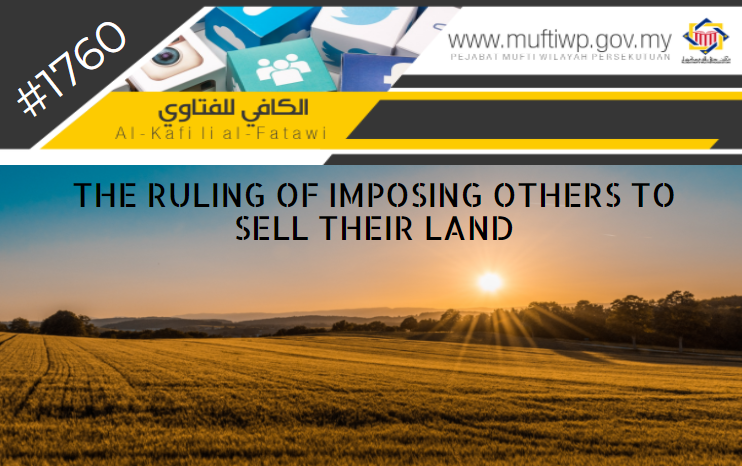 Assalamualaikum SS Mufti. My family own land in the countryside. The land was originally owned by my parents and she already transferred the ownership of the land to 2 of my elder and younger sisters. The location of the land is behind the house of my uncle. The problem is, my uncle keeps on asking about the land and asks us to sell it to him. The issue is the grant for the multiple ownership land is in the hand of my uncle and it seems like he is refraining from the process of the division of the grant to individuals who are his own relatives. When he is asked, he said if anyone wants so, proceed with the division by himself. I as his nephew can only remain silent and restrain myself from questioning.

The land is deserted, my uncle and aunt said that they cultivated palm trees on the land which is owned by our family. For that, we are okay, as long as they are honest. In the past Syawal, they came to meet both of my parents, I thought they wanted to visit us due to eid al-fitr, but actually, they came to give RM200 which is the money from the palm tree to my parents. During this meeting, my uncle and aunt once again voiced out their intention to buy the land owned by my family. Indeed, the land is put for sale because it will be owned by my elder and younger sisters.

My question is, does the action of my uncle and aunt persuading my parents to buy their land is according to shara’? This has torn our hearts apart because it seems like we are not eligible to own the land. I consider this an act of greed with their own flesh and blood. Hope for an explanation from SS Mufti pertaining to the issue. Thank you.

Sales and purchase in Islam stand under the principle of mutual agreement and no compulsion. A person shall not force and urge other people to sell or buy something they do not want, but rather shall respect others’ stance.

Next, it is wajib for them to ask for permission from the owner of the property before using their property, in the above case, cultivating land owned by your relatives. While pertaining to profit gain from the cultivated land, your uncle also has his right upon the profit as the wage that mutually agreed by both parties.

Lastly, we advise all parties to open their heart and respect everyone’s stand especially regarding sales and purchase of the land so harmony among the family members can be sustained to avoid all sorts of enmity and animosity.

Gift or said as hibah technically means a contract of transferring ownership of a property from one party to another with no return (‘iwad) which is done while alive by choice. Parents gifting their children is something encouraged by shara’. (See al-Mu’tamad fi al-Fiqh al-Syafie, 3/175-177)

A land that is made as a gift is included under permissible gifts in Islam. When all pillars and requisites of hibah are fulfilled, only then a change of ownership between the landowner and new owner is settled, and he is rightful to do anything permitted by shara’ like taking lease from the land, cultivating it or even sell it.

At the same time, no party may take one’s land as well as using it without permission or even forcing the landowner to do actions not agreed upon. Prophet Muhammad PBUH gave a strict warning to those who seize and take others’ property unjustly even if the amount is small.

It is narrated from Aisha R.Anha that the Prophet PBUH said:

He who wrongly took a span of land, Allah shall make him carry around his neck seven earths

Therefore, if an uncle or aunt cultivates the land without the permission of the family as the rightful owner, then they shall dig up all the cultivated plants, or even may impose a lease upon them. Further discussion by the scholars is stated in chapter Bai’ al-Fudhuli. However, if your family agree for the land to be cultivated, then your father may take the profit and the percentage of the wage is decided mutually. (Refer al-Mu’tamad, 3/216).

The Ruling of Pressuring Other Person in Sales and Purchase

Originally, sales and purchase in Islam should be done while each party mutually agree to one another while the welfare of both parties is secured. Allah SWT says in al-Quran:

O you who have believed, do not consume one another's wealth unjustly but only [in lawful] business by mutual consent.

However, the scholars state that property sold to other parties while giving pressure subtly, as well as persuasion, are still considered valid in the eyes of shara’ unless there are compulsion and threat towards life and the like. (Refer: al-Mausu’ah al-Fiqhiyyah al-Kuwaitiyyah, 6/105)

As suggestion and recommendation, it is best to be settled as fast as one could on the division of the land to change the status of the land from multiple ownership grant to individual ownership by referring to the experts like Land Registry Office, property lawyers and others so that the division of ownership may proceed smoothly and rapidly.

Lastly, Islam highly emphasizes preserving silaturrahim among the people, especially among relatives. It is best for all parties to have mutual respect towards each other’s right and stand as well as keeping peace and harmony so that family relations and relative will not break only due to acquiring worldly means which are not permanent.