AL-KAFI #1768: THE RULING OF TEACHING THE NON-MUSLIMS VERSES OF AL-QURAN AS A REMEDY FROM ILLNESSES 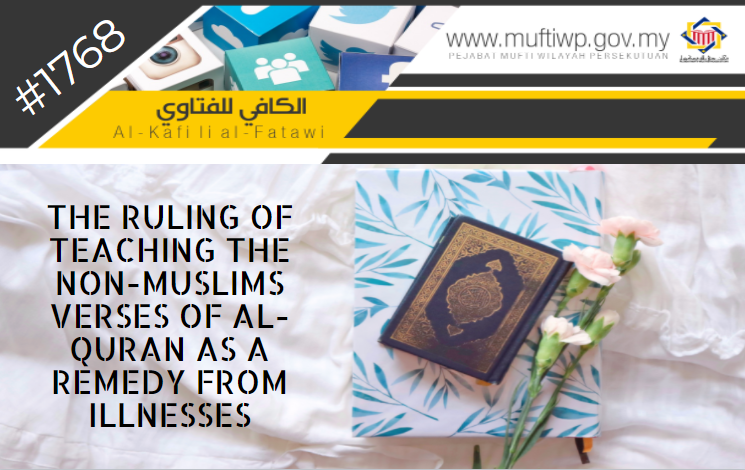 Assalamualaikum wbt. What is the ruling of me advising a non-Muslim to recite the dhikr which is taken from verses of al-Quran as a remedy to his illness? Shall he say his syahadah and believe in Allah first? Hope for guidance.

Al-Quran in general is a guidance for all mankind, whether Muslims or non-Muslims. It is permissible for non-Muslims to learn, read and ponder upon the content of al-Quran, whatnot only to recite or read some verses from al-Quran as a form of remedy from any illness. It is not wajib for him to say syahadah first before reading or pondering upon al-Quran.

And if any one of the polytheists seeks your protection, then grant him protection so that he may hear the words of Allah. Then deliver him to his place of safety. That is because they are people who do not know.

According to Imam al-Qurtubi in his tafsir, if a musyrik enters Muslims area in peace, for instance, to do sales and purchase or trade, there is no problem to give protection to them. And if he wants to listen or learn al-Quran, one should read to him the Quran. (Refer Jami’ Ahkam Al-Quran, 3/49)

While Prof. Dr Wahbah al-Zuhayli said in his tafsir that this verse not only states on a musyrik who asks for protection by listening to al-Quran but is also applied to those who want to listen to arguments as well as the knowledge that Islam is a true religion or want to know the answers to distortions on Islam that he heard. (See Tafsir Al-Munir: 5/391).

Imam al-Nawawi said in his book on the ruling of a kafir or musyrik to listen to al-Quran and learn it even if he is not a Muslim:

“Our ashab (scholars of shafi’e) said: disbelievers shall not be refrained from listening to al-Quran, but from touching the mushaf. Is it permissible to teach them al-Quran? It depends on the situation; if it is not hoped for him to become a Muslim, it is not allowed, but if there is hope for him to be a Muslim, it is allowed according to the most sahih opinion; this is the opinion of al-Qadhi Husain and is approved by al-Baghawi and the others.” (See Al-Majmu’: 2/85)

Consequently, there is no specific prohibition on practising verses of al-Quran as a remedy to any illnesses. It is also not needed for them to say their syahadah first to learn al-Quran, but it is highly encouraged for them to learn and ponder upon al-Quran with insight. Among the reasons why many scholars permit non-Muslims to read and learn al-Quran is to open the path for many other people to embrace Islam, as well as applying the concept of Islam as a mercy to all the world.