AL-KAFI #1775: IMAM DOES NOT RECITE QUNUT IN SUBH PRAYER; IS IT PERMISSIBLE FOR THE MA’MUM TO RECITE IT? 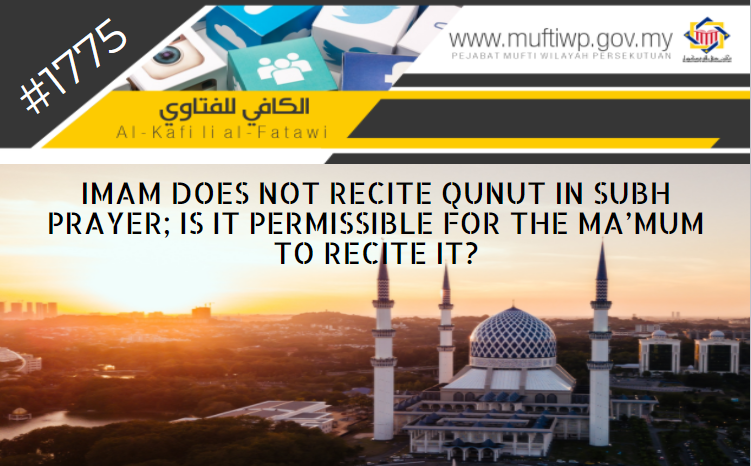 Assalamualaikum. I would like to ask, is it permissible for a ma’mum to recite qunut in Subh prayer if the imam does not recite it?

Hoping for an explanation. Thank you.

To conclude, the ma’mum may recite qunut even though the imam does not recite it because it is not conditioned to be done simultaneously (muwafaqah) with the imam, with the condition he has the chance to follow back the imam during his first sujud or sitting between the sujud.

However, if the ma’mum does not has the chance to follow back the imam until on the second sujud, then the ma’mum may not do so as he had missed two requisites of prayer. Therefore, when the ma’mum leaves qunut recitation as he follows the imam who does not do so or others, then it is sunnah for him to do sujud sahwi after the imam gives salam and before he himself gives the salam.

Firstly, reciting qunut in Subh and witr prayer on the last half of Ramadhan are included in sunnah ab’adh to madhhab al-Shafi’e. Sunnah ab’adh is a sunnah when missed shall be replaced with sujud sahwi. Imam al-Ramli in his book, Nihayat al-Muhtaj cited a saying that:

Based on the above text, whoever leaves sunnah ab’adh shall cover or replace it with sujud sahwi before giving salam.

Secondly, reciting qunut is not wajib to be done muwafaqah (simultaneously) with the imam. This is as mentioned by Imam al-Baijuri:

However, if the ma’mum feels like he will not have the chance to finish his recitation of qunut until the imam reaches the second sujud, then it is prohibited for him to recite qunut and he shall follow the imam by leaving it.

Therefore, if he leaves the qunut due to following the imam who did not do so, then it is sunnah for him to perform sujud sahwi after the imam gives salam, before he himself gives his slaam. This is as narrated in commentaries of al-Minhaj where:

If a ma’mum leaves qunut recitation due to following the imam who follows madhhab Hanafi, then he shall perform sujud sahwi. This is because, what is considered here is the madhhab of the ma’mum in a sahih opinion, different from al-Qaffal who is of the opinion that the person shall not perform sujud sahwi, as in his method, what is considered is the madhhab of the imam. (Refer Mughni al-Muhtaj Syarh al-Minhaj, 1:428 / Nihayat al-Muhtaj Syarh al-Minhaj, 2:68)

However, it shall be considered that the practice of reciting qunut is the customary practice of Malaysians who practice madhhab al-Shafi’e. So, the imam shall honour this situation by reciting qunut and does not leave it intentionally in prayer.

While for those who are outside of the country practicing madhhab other than al-Shafi’e, then the opinion of al-Qaffal as above (one is not obligated with sujud sahwi because he follows the madhhab of his imam) is more prioritised or enough with short recitation of qunut just to complete the rukn.