AL-KAFI #1788: THE RULING OF ACCEPTING COMMISSION FROM A LAWYER 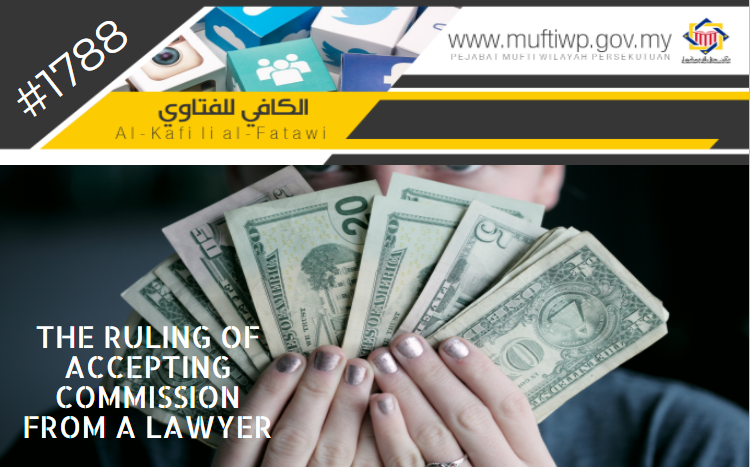 I am a lawyer. What is the ruling if I give some amount of money to those who introduce my service to my clients?

It is permissible for a lawyer to give commission to those who help him acquiring new clients as mutually agreed.

Generally, the practice of giving certain rewards to those who introduce others’ service to the third party is known as commission. Payment of commission differs according to the mutual agreement agreed upon by both parties. The commission is given if an agent successfully acquires clients for the offered services.

Commission or wage is permissible as long as it does not come from prohibited works. In Islam, the wage is known as ju’alah. According to the book al-Fiqh al-Manhaji, ju’alah is:

“Ju’alah (souvenir) is obligating a known reward for a specific task, whether it is known or not, by a known person or not.”

The basis of sanctioning the concept of ju’alah is the verse of al-Quran:

They said, "We are missing the measure of the king. And for he who produces it is [the reward of] a camel's load, and I am responsible for it."

According to Ibn Jarir, the phrase (صواع) means a weighing scale for food according to most ahl al-tafsir. Next, Ibn Jarir explains the context of the verse which refers to whoever found the weighing scale will be rewarded with food weighted one camel. This is stated in his tafsir book:

Even though the verse is stating on the shari’a of the nation before the coming of Prophet Muhammad PBUH, but there is a source of shari’a which permits it as mentioned in the hadith narrated by Abu Sa’id al-Khudri RA, he said:

Some of the companions of the Prophet (ﷺ) went on a journey till they reached some of the 'Arab tribes (at night). They asked the latter to treat them as their guests but they refused. The chief of that tribe was then bitten by a snake (or stung by a scorpion) and they tried their best to cure him but in vain. Some of them said (to the others), "Nothing has benefited him, will you go to the people who resided here at night, it may be that some of them might possess something (as treatment)," They went to the group of the companions (of the Prophet (ﷺ) ) and said, "Our chief has been bitten by a snake (or stung by a scorpion) and we have tried everything but he has not benefited. Have you got anything (useful)?" One of them replied, "Yes, by Allah! I can recite a Ruqya, but as you have refused to accept us as your guests, I will not recite the Ruqya for you unless you fix for us some wages for it." They agree to pay them a flock of sheep. One of them then went and recited (Surat-ul-Fatiha): 'All the praises are for the Lord of the Worlds' and puffed over the chief who became all right as if he was released from a chain, and got up and started walking, showing no signs of sickness. They paid them what they agreed to pay. Some of them (i.e. the companions) then suggested dividing their earnings among themselves, but the one who performed the recitation said, "Do not divide them till we go to the Prophet (ﷺ) and narrate the whole story to him, and wait for his order." So, they went to Allah's Messenger (ﷺ) and narrated the story. Allah's Messenger (ﷺ) asked, "How did you come to know that Suratul- Fatiha was recited as Ruqya?" Then he added, "You have done the right thing. Divide (what you have earned) and assign a share for me as well." The Prophet (ﷺ) smiled thereupon.

However, the reward should be determined of its rate from the beginning as stated by Imam al-Nawawi:

Due to this contract being not definite like stated above, both parties have the right to revoke the contract without mutual agreement. This is mentioned by Imam al-Syirazi in his book:

However, Imam al-Syairazi added, if the contract is revoked, it should be done before the agreed task is done. If the task is already done and the wager revokes the contract, then the worker should be paid reasonably for the task done.

In conclusion, the ruling of a person receiving the wage/ commission from any task is permissible because the action is included under the concept of ju’alah. However, ju’alah shall fit conditions as stated above to avoid any element of injustice between both parties. Wallahu a’lam.