AL-KAFI #1799: THE RULING OF SALES AND PURCHASE OF CONVENTIONAL INSURANCE COVERAGE BECAUSE IT IS CHEAPER 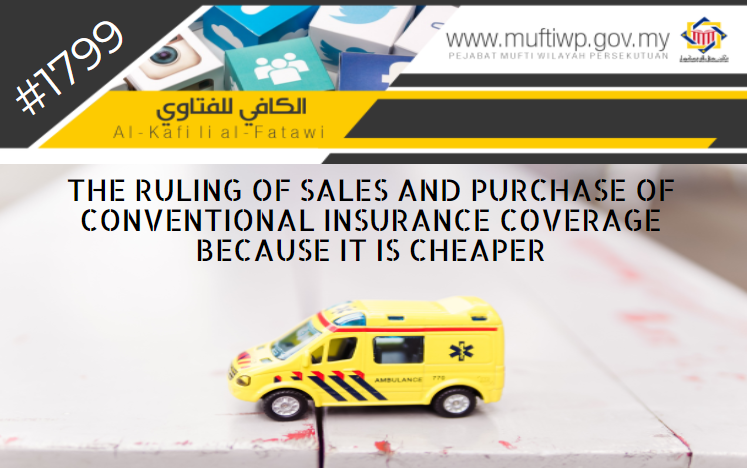 Assalamualaikum. SS Mufti, I would like to ask. What is the ruling of selling conventional insurance coverage to Muslims with the intention of wanting to help them acquire coverage with a lower monthly contribution? And what are the ruling for a Muslim insurance seller and the contributor? Explanation from SS Mufti is highly appreciated.

Helping one another among Muslims is a praised act of service. However, helping by selling conventional insurance plans is haram and prohibited. The main reason is that conventional insurance plan does not comply with the standard of permissible transactions in Islam as the transaction contains the elements of usury (riba), uncertainty (gharar), and gambling which are prohibited by Shara’. The prohibition is towards all parties involved directly; including the seller or buyer. Especially for these days where the alternatives for insurance plans rather than conventional ones already exist.

Pure intention to help one another as Muslims is a praiseworthy act. However, that pure intention shall be accompanied by actions appealed to the spirit of Shari’a even in offering insurance plans to them.

The ruling of conventional insurance whether general insurance like coverage for cars, houses, motorcycles, and the like is haram. It aligns with the decision of the 16th and the 89th National Fatwa Council for Islamic Religious Affairs Malaysia. Among the main reasons for the prohibition of a conventional insurance plan are referring to its form of transaction which contains elements contradict with the basic principle of sales and purchase in Islam like gharar (uncertainty), riba, and gambling.

The resolution of Majma’ al-Fiqh al-Islami in the year 1979 and 1985 also mentioned the same ruling which is prohibiting all forms of conventional insurance plans including life, motor, business insurance plans and etc. As an alternative, it is permissible to take a takaful plan which applying the concept of cooperating with each other as well as willful contribution.

Next, it is clearly stated in Islam that ‘the ends do not justify the means’ unless in dire and needy situations which are acknowledged by shara’ based on several conditions.

This guideline is stated by Allah SWT in His saying:

while He has explained in detail to you what He has forbidden you, excepting that to which you are compelled

Looking at the above situation, we do not see that offering a conventional insurance plan as a dire need as there are several alternatives like turning to takaful companies that offer an insurance plan that aligns with the shari’a spirit. The policy rate for takaful insurance is undeniably pricier than the conventional ones. However, the situation is not considered as an exigent (darurat) situation which permits a person to commit haram actions.

Kindly refer to our article pertaining to exigent (darurat) on the official website:

At the same time, finding halal sources is a commandment for each Muslim individual. Having this stance is highly important to avoid being included among those who are mentioned by the Prophet PBUH as Muslims who take halal and haram matters lightly.

“A time will come to mankind when a man will not care whether what he gets comes from a lawful or an unlawful source.”

Lastly, may Allah bless all Muslims with the halal provision and ease all of us in finding halal resources. Wallahu a’lam.