AL-KAFI #1800: THE PERIOD OF ‘IDDAH FOR WOMEN EXPERIENCING ISTIHADHAH 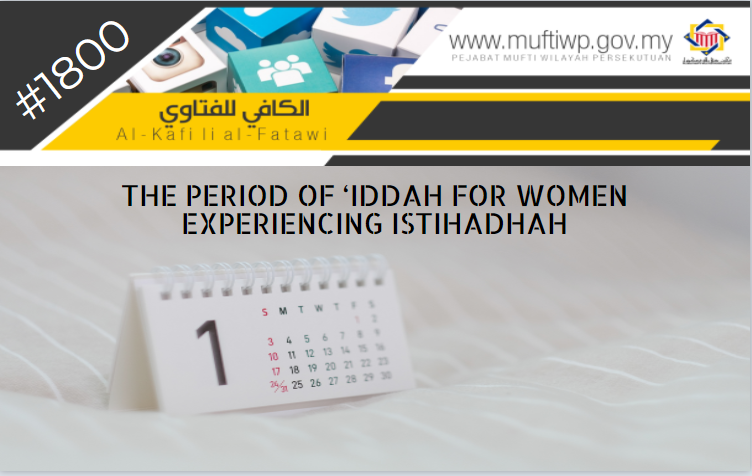 Assalamualaikum. I have a question on the period of ‘iddah for women experiencing istihadhah. Does their period the same as women in menses (haid)? Hope for an explanation from SS Datuk Mufti.

The ‘iddah for divorced women who are still having their menstruation is three times of pure state in accordance with the saying of Allah SWT:

While the period of ‘iddah for women who are already menopause (stop having menstruation) who are divorced while being alive is three months based on the saying of Allah SWT:

And those who no longer expect menstruation among your women - if you doubt, then their period is three months, and [also for] those who have not menstruated.

While the period of ‘iddah for pregnant women is by giving birth based on the saying of Allah SWT:

And for those who are pregnant, their term is until they give birth

While the ‘iddah for a widower is 4 months and 10 days based on the saying of Allah SWT:

And those who are taken in death among you and leave wives behind - they, [the wives, shall] wait four months and ten [days].

Imam al-Nawawi stated that the period of ‘iddah for a woman who experiences istihadhah turns to her period of purity (normal menstruation cycle and differences in her blood). While for a woman of mustahadah mutahayyirah (who forgets her menstruation period and is unable to differentiate between her blood) is three months automatically. (Refer Minhaj al-Talibin wa Umdat al-Muftin fi al-Fiqh, 253)

The reason why it is 3 months for mustahadah mutahayyirah is that normally, menstruation will come once a month which includes both periods of menstruation and purity. (Refer Al-Mausu’ah al-Fiqhiyyah al-Kuwaitiyah, 29/328)