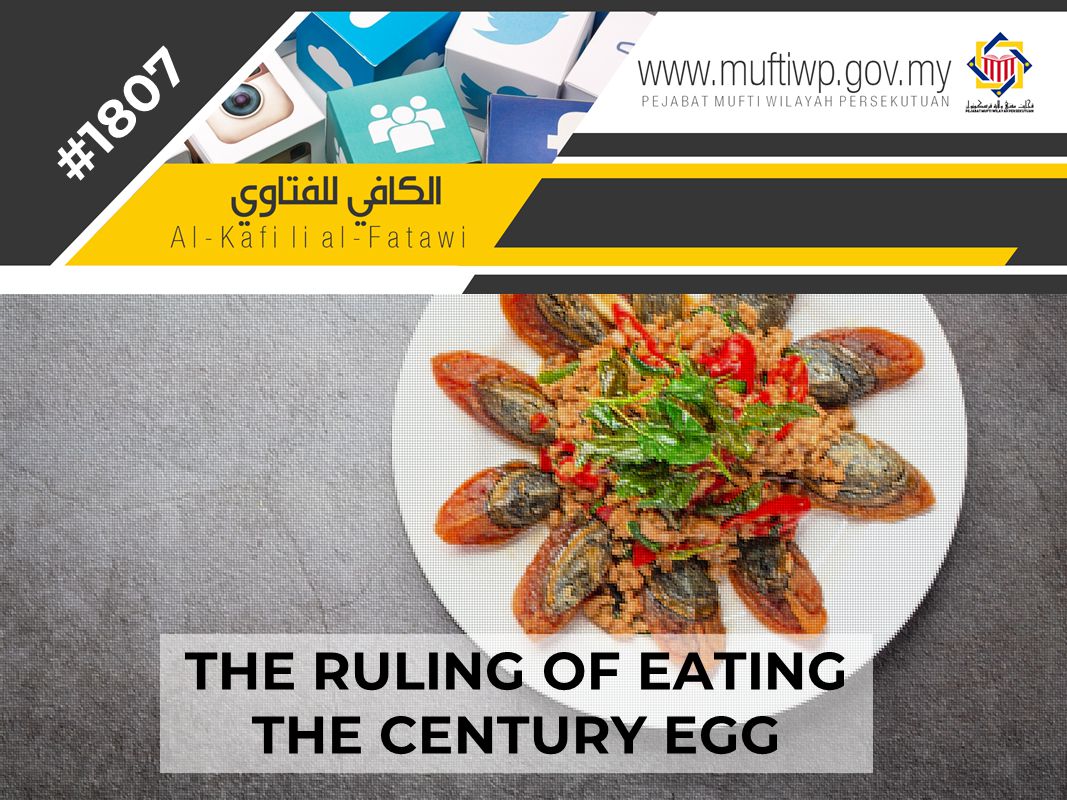 Assalamualaikum. Is it permissible to eat the century egg (pidan)?

The ruling of eating the century egg is halal based on the Islamic legal maxim which states “The original rule for food is halal unless there is a dalil which states on its prohibition”. At the same time, the process of making and preserving the century egg does not contain elements that change the permissibility of the egg, so the ruling of eating it is halal as long as it is not mixed with any substances which are prohibited like the intoxicants, najis and the like.

The century egg is an alkalized egg from the traditional Chinese delicacy made from either duck or chicken eggs. These are often called a thousand-year or century-old eggs, even though the preserving process lasts only about 30 days. The modern method is done by soaking the eggs in a saline solution for some days according to the season like 15 days in summer or 20 days in winter. However, boiling is not needed.

(Refer to the website: Enhancing the Value of Eggs: How to Make Balut and Century Eggs)

After the fermenting process is done, the texture of the eggshell changes as if it aged already. The drastic change is apparent when the egg-white become jellish and dark brown in texture. The most apparent change is when the yolk becomes dark green as well as becoming heavy cream and yoghurt in texture. Most of the pungent smell from the century egg comes from the yolk due to the sulphur and ammonia elements inside it.

(Refer On Food and Cooking: The Science and Lore of the Kitchen, p. 117

Based on the making and preserving methods mentioned above that does not include any prohibited elements like the intoxicants as well as filthiness like the najis, blood and the like, so the ruling of eating the century egg is halal. This statement is supported by the legal maxim which is decided by the scholars:

“The original (rule) in the chapter of food is halal. Its ruling does not change to haram unless there is a specific dalil stating so”

This method is strengthened with the general nas which states that all food and healthy nutrition causing a Muslim to become energised in fulfilling his obedience to Allah SWT is halal to be consumed and benefited.

O mankind, eat from whatever is on earth [that is] lawful and good and do not follow the footsteps of Satan. Indeed, he is to you a clear enemy.

However, all food and beverages which may harm human’s physical and mind is prohibited by shara’. This is clearly stated through the saying of Allah SWT:

In conclusion, the ruling of eating the century egg is categorised under food which is good and permissible to be eaten as long as it is not mixed with other substances which are prohibited or harming one’s spiritual or physical. Lastly, may Allah SWT ease the affairs of His servants in searching for halal things and is abstained from taking food which is haram as well as doubted.