AL-KAFI #1843: IS IT PERMISSIBLE TO PRAY SUNNAH PRAYER WITH 4 RAKAATS 1 SALAM? 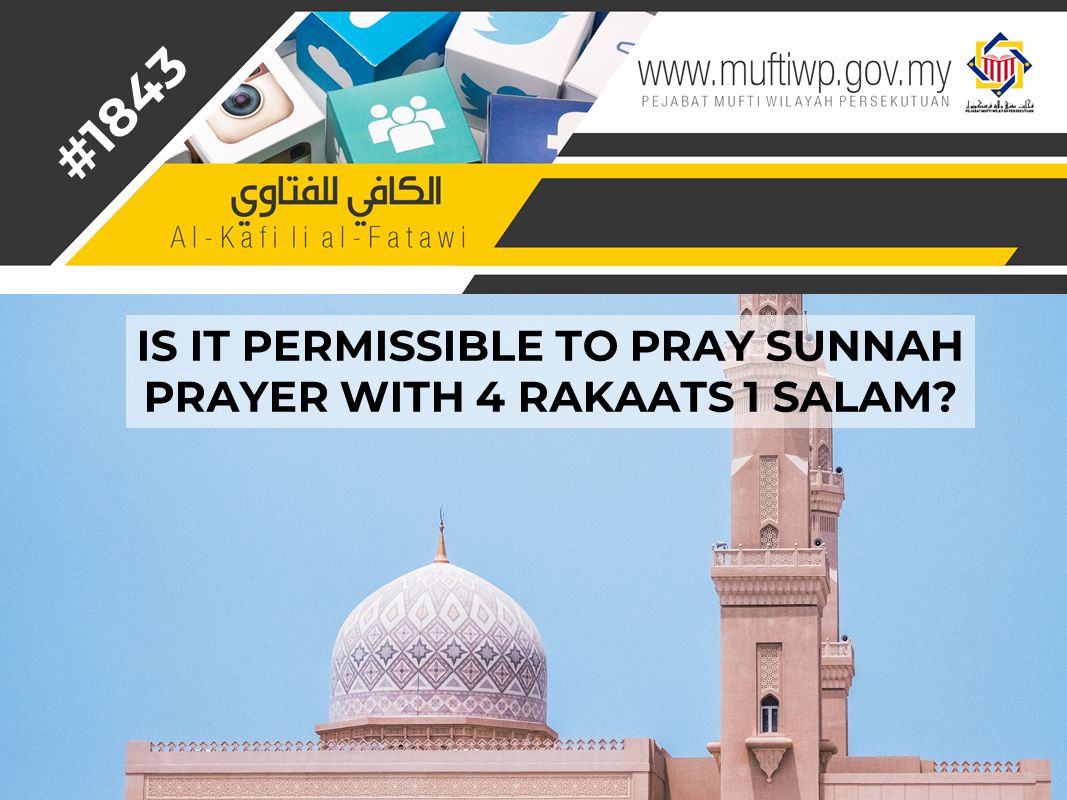 Sunnah prayer in 4 rakaats and 1 salam is permissible to be done. However, performing 4 rakaats sunnah prayer by dividing the two rakaats with one salam is more afdhal as there is an addition of intention, takbir, tasyahud (tahiyat) and salam which add to the rewards.

Rawatib sunnah prayers are done in 2 rakaats according to a hadith narrated by Abdullah bin Umar R.Anhuma where the prophet PBUH said:

The opinion stating that sunnah prayer is divided into 2 rakaats with 1 salam is the opinion of majority scholars of the madhhab including mazhab al-Shafi’e. [2] (Refer Tuhfah al-Ahwazdi 2/416, 2/411)

Besides, for those intending to perform 4 rakaats sunnah prayer before (qabliyyah) the Zuhr prayer and after (ba’diyah) it, then he is encouraged to perform 1 salam for every 2 rakaats based on the hadith mentioned before. (Refer Majmu’ Syarah Muhadzzab 4/10) [3]

4 rakaats sunnah prayers before (qabliyah) the Zuhr prayer by dividing 2 rakaats and 1 salam causing the addition to the intention, takbir, tasyahud and salam. This is because the rewards of these actions given by Allah are depending on the amount of effort given. This aligns with the legal maxim which states:

This maxim is taken based on hadith narrated from A’isyah R.Anha where the Prophet PBUH said:

the reward is equal to your hardship or your spending

For more added information, kindly refer to the discussion on rawatib sunnah prayers which are muakkad and not muakkad on the following link:

In conclusion, 4 rakaats sunnah prayer with 1 salam before (qabliyah) the Zuhr prayer and after it (ba’diyah) is afdhal to be divided into 2 rakaats with 2 salams in which 1 salam is for every 2 rakaats. This is because, there is an addition to intention, takbir, tasyahud and salam which call for many additional rewards.