AL-KAFI #1844: THE RULING OF WORKING IN A CAFE OWNED BY A NON-MUSLIM THAT SERVES HALAL FOOD 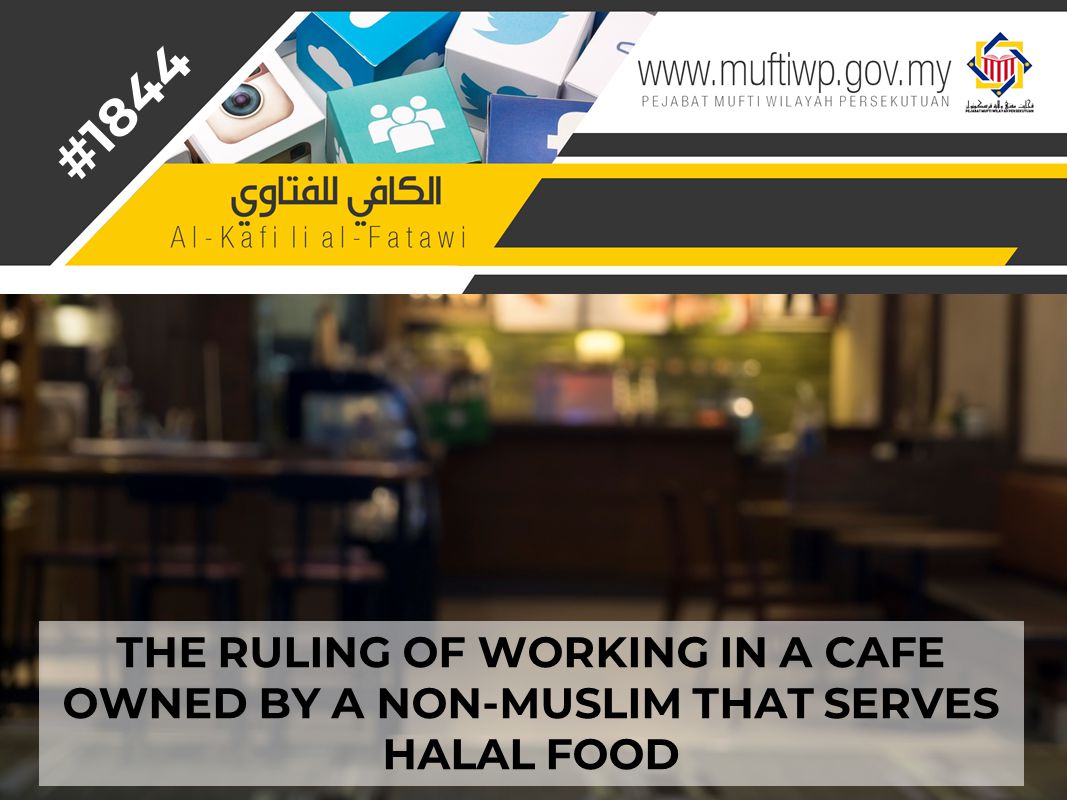 I work in a café owned by a non-Muslim and I am the only Muslim and Malay worker in the café. For your information, the wet ingredients like chicken, meat and shrimps, all are bought from Malay people and is undoubted of its cleanliness. Our café also owns a halal certificate in terms of the chicken slaughterhouse and for other wet ingredients. It is just this café does not get a halal certificate from JAKIM as it is really hard to acquire. The issue here is that the chef who prepares the food is a non-Muslim, but I see no issue here as the chef works abiding by the SOP and hygiene. So, my question here is, is it permissible for me to continue working in the café? Sometimes, I feel guilty and obligated if what I did so far is sinful in the religion.

Based on the above question, the ruling of working in a café owned by a non-Muslim is permissible and the income is halal as long as it has no element which is prohibited especially on the preparation of food as well as the trade activities.

Islam emphasizes its ummah to always seek halal and good provision in fulfilling the daily needs. This is in accordance with the saying of Allah SWT:

“O mankind, eat from whatever is on earth [that is] lawful and good…”

Syeikh al-Sa’di commented on this verse saying that it refers to all humans whether believers or disbelievers, to eat whatever is on earth, consisting of wheat, fruits and animals which are halal for them (to eat and to take benefit from), not by seizing, stealing, through haram trade activities and other haram actions. While ‘tayyiban’ means not from filthy things like corpses, blood, swine meat and others. This verse is the dalil that the original rule for something (to be eaten and to be taken benefit from) is permissible. (See Tafsir al-Sa‘di, 1/80)

In the aspect of muamalat, the basic principle is the permissibility to do muamalah (trade/ exchange) as long as there is no dalil that prohibits or states otherwise. This aligns with the legal maxim which states:

“The original (basic) law for everything is permitted, unless there is an indication that shows the forbidden state of it.” (See al-Asybah wa al-Naza’ir by al-Suyuti, pg. 60)

Occupation is included under muamalat. So, the ruling of occupation is permissible as long as there is no dalil that prohibits or states otherwise. The scope of its permissibility is wide, while its prohibition is limited to actions prohibited in Islam. In other words, if an occupation involves matters which are haram, then they are ruled as haram like working in liquor companies, gambling, non-Muslim café that serves food based on liquor, swine meat or the like. Also, if the activities or services done by a company are permissible, then the ruling is permissible like telecommunication companies, fruit stalls, trades not involving riba and gharar (uncertainty) system, and etc.

Based on the above statement, the ruling of working in a café owned by a non-Muslim is permissible and the income is halal as long as it has no element which is prohibited especially on the preparation of food. In fact, it is clear as stated that all ingredients used are from halal and good sources as well as having the halal certificate.

Still, if you are doubtful, leaving doubtful matters is better as mentioned by the Prophet PBUH:

“Leave what causes you doubt and turn to what does not cause you doubt.”