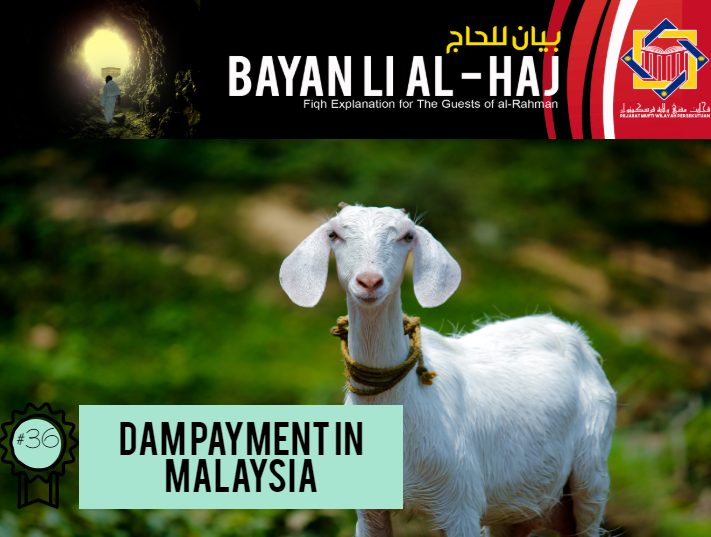 Assalamualaikum. I would like to ask for an explanation from Dato’ Seri Mufti regarding “Dam for hajj”. I am one of the pilgrims who will InshaAllah be performing hajj this year and is expected to depart for the Holy land on 2/8/2018. I will be performing tamattu’ hajj, where I am told by Tabung Haji to pay dam at a Tabung Haji counter, which also includes the payment for animal sacrifice. The matter which confused me is, there are some ustaz who stated that it is impermissible to make dam payment because we haven’t performed the worship & the payment should be made in Saudi Arabia. I hope for an explanation of how we could correct the mistake we made before we depart there. Is it permissible to make dam payment in Malaysia? Jazakallah Dato’ Seri Mufti.

Alhamdulillah, praise and thanks to Allah for the countless blessings He has blessed us all with. Blessings and salutations to the Prophet Muhammad PBUH, his wives, his family, companions and all those that follow his teachings to the day of judgement. We received questions regarding dam payment made in Malaysia before performing hajj in the Holy land. Is it acceptable or not?

Dam payment is an obligatory fine for pilgrims who violate the conditions of the worship of hajj or umrah. Normally, the majority of hajj pilgrims from Malaysia will perform tamattu’ hajj. They will have to pay Dam Tartib and Takhyir because they will be performing the worship of umrah first before the worship of hajj itself. Allah SWT states in the Quran:

“Then whoever performs 'umrah [during the Hajj months] followed by Hajj [offers] what can be obtained with ease of sacrificial animals.”

Referring to the above question, dam payment made outside of the Holy land, such as in Malaysia is permissible on the condition that the animal sacrifice must be slaughtered in the Holy land and not in other places. The following are the explanation regarding this issue:

Most Malaysian hajj pilgrims who will be performing tamattu’ hajj will be using the service of Tabung Haji as a representative to make the dam payment. Using a representative in the dam payment process is permissible. According to Islamic legal maxim, this is known as Wakalah. Allah SWT also mentions the usage of the wakalah system in the Quran:

[Joseph] said, "Appoint me over the storehouses of the land. Indeed, I will be a knowing guardian."

The above verse of the Quran explains that Islam permits the appointment or representation of someone for a person who is incapable to do it.

The Hajj Advisory Committee of Lembaga Tabung Haji has discussed and decided that it is permissible and encouraged for Malaysian pilgrims to pay the dam at a predetermined rate before arriving at the Holy land. Its justification is to facilitate the management of Tabung Haji for the process of buying livestock that will be slaughtered there. Although dam payment is made in Malaysia, the slaughter of the animals is performed in the Holy land. In this case, it is permissible (Hajj and Umrah FAQs issued by Tabung Haji Board Guidance Division, pg. 162). This is in accordance with the words of Allah SWT in the Qur'an:

“For you, the animals marked for sacrifice are benefits for a specified term; then their place of sacrifice is at the ancient House.”

According to the above verse, it is clear that it is prohibited to change or move the location for the slaughtering of animals. Furthermore, it is obligatory to be performed in the specified place. Thus, it is obligatory for the dam payment with the intention of using it for animal sacrifice to be made in Mecca and it should be distributed to the poor and needy there. As for paying the dam in advance while one is still in Malaysia, it is permissible in order to facilitate Tabung Haji in managing it.