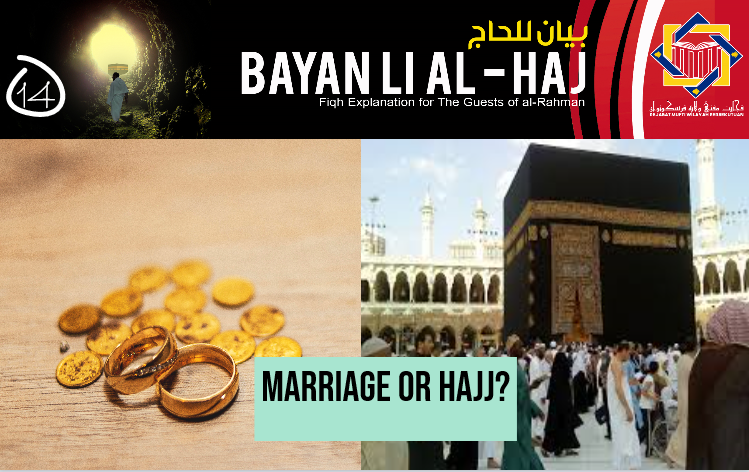 What should a person do when he only has sufficient money for hajj, but he also wants to get married?

Marriage is a commandment in Islam. It is in the nature of humans to love each other and this is explained in the Quran through the statement of Allah SWT:

“And of all things We created two mates; perhaps you will remember.”

The term nikah is used in syarak as an aqad (agreement) that made it permissible for istimta’ (intercourse or intimacy) between a husband and wife according to syarak. The Arabs also used the word nikah to mean intercourse or intimacy. (Refer al-Fiqh al-Manhaji ‘ala Mazhab al-Imam al-Shafie, pg. 671)

Every healthy adult (physical and mental) would have the desire to get married for their human nature of needing someone. The word ‘zawaj’ which is used in the Quran means a pair and the context of its usage means marriage. Allah SWT made marriage to make a relationship permissible and to prevent adultery, for it is natural for humans to desire a partner.

For this reason, it is encouraged for a person who is capable to hasten in fulfilling this encouraged sunnah, as stated in a hadith of the Prophet PBUH:

“O young men, those among you who can support a wife should marry, for it restrains eyes (from casting evil glances) and preserves one from immorality; but he who cannot afford It should observe fast for it is a means of controlling the sexual desire.”

The Ruling on Marriage

Hence, each ruling depends on the situation of an individual, if he is able to control himself and is not in a rush to get married, then he should first perform his hajj first. This is in accordance with a statement of Allah SWT:

This is strengthened with the hadith of the Prophet PBUH:

“(The superstructure of) al-Islam is raised on five (pillars), testifying (the fact) that there is no god but Allah, that Muhammad is His bondsman and messenger, and the establishment of prayer, payment of Zakat, Pilgrimage to the House (Ka'ba) and the fast of Ramadan.”

However, if he fears that he is unable to control himself from committing sins, then he should prioritize marrying first to avoid a greater harm.

Syeikh Ibn Qudamah Rahimahullah said: “If it is a necessity for him to get married that he feared he would be troubled (because he is not married), then he should prioritize his marriage first. The reason is, it (the marriage) is an obligation for him if he is capable to provide nafaqah (sustenance) and if he doesn’t think it will be a problem for him, then he should prioritize his hajj. The reason is, in this situation, marriage for him is sunnah, thus, it is less prioritized than hajj where its original ruling is obligatory. (Refer al-Mughni, 5/12)

Syeikh Ibn Uthaiman Rahimahullah said: “Undoubtedly, marriage is prioritized from hajj if a person’s desire is very strong. Then, marriage is a necessity in his life and if he has the intention to get married then he should prioritize his marriage first. This is due to the fact that Allah SWT sanctioned the obligation of hajj for those who are ‘capable’. This is stated in the statement of Allah SWT:

As for teenagers and people who do not have the intention to get married in this year or the next, then they should prioritize hajj first. The reason is, he is not in need to prioritize marriage over hajj. (Refer Fatawa Manar al-Islam, 2/375)

Both hajj and marriage are commandments in Islam. However, hajj is an obligation only for those who are capable. And if he is not in need to get married first and will not face any problems afterwards, then he should perform his hajj first. Indeed, Allah will reward goodness for those who perform hajj, for it is a great commandment of Allah SWT to Muslims.

Lastly, let us all supplicate to Allah SWT to be protected from anything that He dislikes and live under His blessings. Amin.