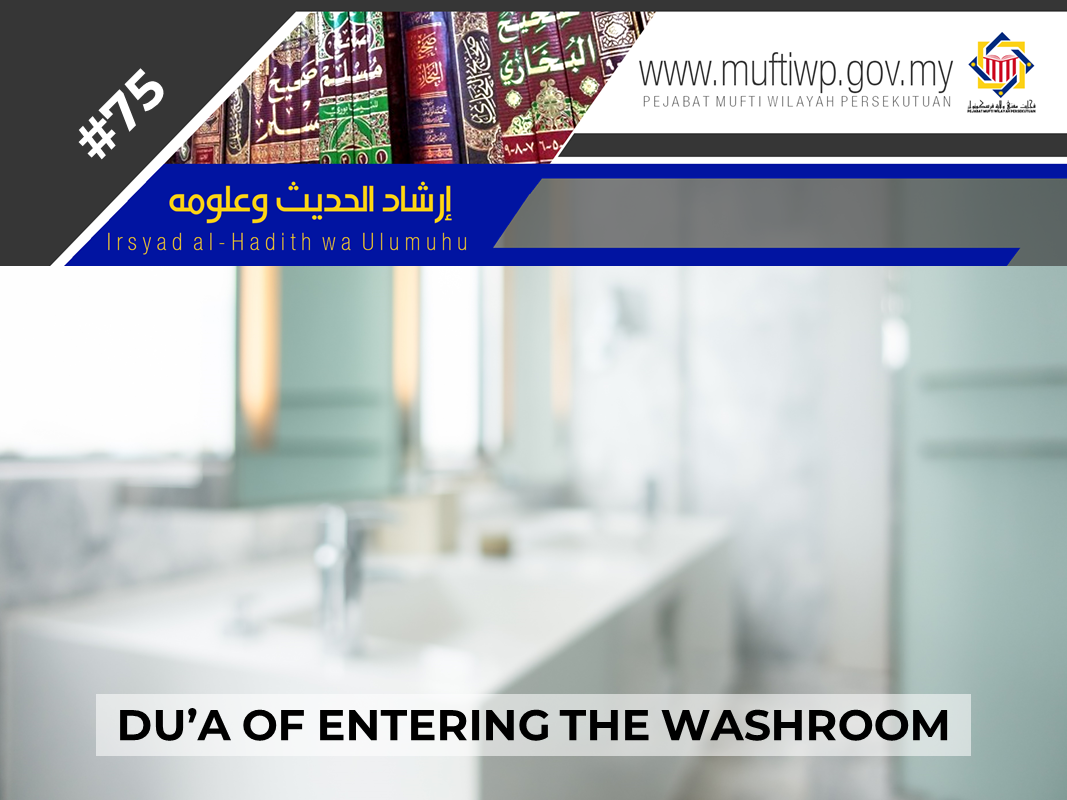 What is meant by the du’a of entering the washroom and what is its fiqh (comprehension of the hadith)?

The Prophet PBUH is a man of the best character. He PBUH portrayed ethics to us through his words, actions and etc. that even the tiniest action is not abandoned by him. For that, this Irsyad al-Hadith will be explaining the status of du’a of entering the washroom as well as the fiqh related to it.

Matn (Text) of the Hadith

It is narrated by Anas bin Malik RA:

Whenever the Prophet (ﷺ) went to the lavatory, he used to say: "Allahumma inni a`udhu bika min al-khubuthi wal khaba'ith (O Allah, I seek refuge with You from male and female devils)”

The Definition of Shaytan

Besides, each creation whether jinn, humans and animals that disobey Allah SWT’s commandments as well as calling towards evildoings and far from any goodness is named as shaytan. This is in accordance with the saying of Allah SWT:

And thus We have made for every prophet an enemy - devils from mankind and jinn, inspiring to one another decorative speech in delusion.

The Names of Shaytan

Among the names of shaytan mentioned in the hadith of the Prophet PBUH:

Uthman bin Abi al-Asr came to meet the Prophet PBUH, then he said:

Allah's Messenger, the Satan intervenes between me and my prayer and my reciting of the Qur'an and he confounds me. Thereupon Allah's Messenger (ﷺ) said: That is (the doing of a) Satan (devil) who is known as Khinzab, and when you perceive its effect, seek refuge with Allah from it and spit three times to your left. I did that and Allah dispelled that from me.

It is narrated from Ubaiy bin Ka’ab that the Prophet PBUH said:

"Indeed there is a Shaitan for Wudu' who is called "AI-Walahan." So beware of having misgivings about water."

Jami’ al-Tirmidhi (52) [Imam al-Tirmidhi said this hadith is gharib and its sanad is dhaif (weak) according to ahl al-hadith because we do not know anyone who narrates this hadith other than Kharijah. This hadith also has been narrated by some other chain based on the narration of al-Hassan and there is no sahih hadith from the Prophet PBUH in this chapter. In addition, the narration of Kharijah is not strong according to our companion and he (Kharijah) is evaluated as dhaif (weak) to Ibn Mubarak].

It is narrated from Abdullah bin Mas’ud RA that the Prophet PBUH said:

There is none amongst you with whom is not an attache from amongst the jinn (devil). They (the Companions) said: Allah's Messenger, with you too? Thereupon he said: Yes, but Allah helps me against him and so I am safe from his hand and he does not command me but for good.

The most famous expression is (أعوذ بالله من الشيطان الرجيم) as mentioned in al-Quran through His SWT saying:

So when you recite the Qur'an, [first] seek refuge in Allah from Satan, the expelled [from His mercy].

There is one more expression of al-isti’azah which is (أعوذ بًالله السميع العليم من الشيطان الرجيم) as stated in the hadith narrated by Abi Said al-Khudri, he said:

When the Messenger of Allah (ﷺ) got up to pray at night (for tahajjud prayer) he uttered the takbir and then said: "Glory be to Thee, O Allah," and "Praise be to Thee" and "Blessed is Thy name," and Exalted is Thy greatness." and "There is no god but Thee." He then said: "There is no god but Allah" three times; he then said: "Allah is altogether great" three times: "I seek refuge in Allah, All-Hearing and All-Knowing from the accursed devil, from his evil suggestion (hamz), from his puffing up (nafkh), and from his spitting (nafth)" He then recited (the Qur'an).

I seek refuge from Allah SWT from the accursed devil as well as deviance and harm towards my religion and life. Besides, help me in practising everything that You command and protect me from committing things that You forbid.

Why we are commanded to say isti’azah before entering the washroom?

The scholars have decided that among the reasons why we are commanded to seek refuge from Allah SWT upon entering the washroom is so that we are protected from shaytan who reside in places of najis and where awrah is exposed. In a hadith narrated from Zaid bin Arqam RA, the Prophet PBUH said:

These privies are frequented by the jinns and devils. So when anyone amongst you goes there, he should say: "I seek refuge in Allah from male and female devils."

In conclusion, the du’a of entering the washroom is established from the hadith of the Prophet PBUH as stated above. Besides, we are also commanded to always seek help and protection from Allah SWT in whatever circumstances especially from the whispers of shaytan. Lastly, may Allah SWT give us taufiq and hidayah for whatever we are doing in our life. Ameen.