IRSYAD AL-HADITH SERIES 27: THE STORY OF THA’LABAH WHO REFUSED TO PAY ZAKAT 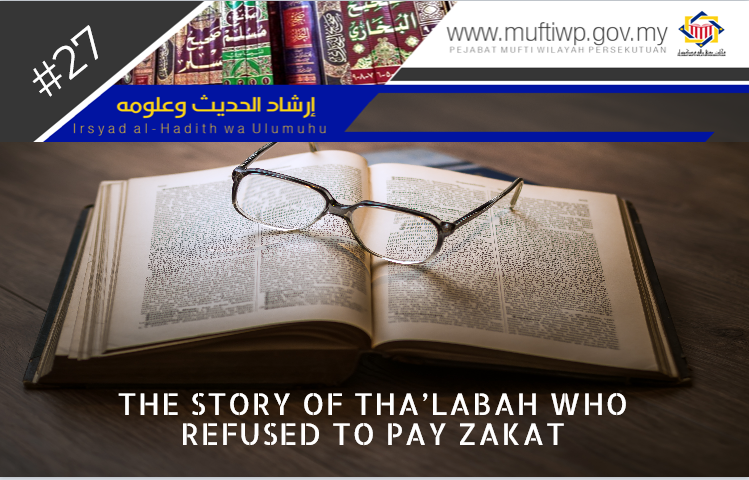 Assalamualaikum, what is the status of the story of Tha’labah who refuses to pay the zakat?

Recently, we heard numerous famous stories that some of the stories heard degrade or shame the name of individuals who are the companions of the Prophet PBUH. Among them is the story of Tha’labah and this story is said to be the cause of revelation (sabab al-nuzul) for one verse of surah al-Tawbah.

Before we analyze this matter further, there are numerous companions of the Prophet PBUH who are named Tha’labah. Thus, which Tha’labah is meant in the story? Al-Hafiz Ibn Hajar list the names of the Companions named Tha’labah in his book:

Thus, are the companions of the Prophet PBUH named Tha’labah, however, the Tha’labah meant in this story is Tha’labah bin Hatib al-Ansari. He was together with the Prophet PBUH in the battles of Badar and Uhud. Furthermore, he died during the rule of Umar and it is also stated that he dies during the time of the rule of Uthman. He was stated to have refused to pay the zakat when it was commanded by the Prophet PBUH as narrated by Sa’id bin Jubair and Abi Qatadah when commenting verse 75 of surah al-Taubah. See al-Isti’ab fi Ma’rifah al-Sahabah (1/20)

The Summary of the Story of Tha’labah

And among them are those who made a covenant with Allah, [saying], "If He should give us from His bounty, we will surely spend in charity, and we will surely be among the righteous."

When the verse was revealed, one of the men went to meet Tha’labah and told him: Allah SWt has revealed a verse regarding your refusal to pay zakat and curse you for it Tha’labah. When hearing this, Tha’labah went to meet the Prophet PBUH to pay his zakat but the Prophet PBUH refuse to accept it for Allah SWT has prevented me from accepting anything from you. After the Prophet PBUH passed away, Tha’labah went to Abu Bakar who was the caliph at the time and Abu Bakar refuses him. Afterwards, during the rule of Caliph Umar bin al-Khattab RA, Umar Ra too refused any wealth from Tha’labah and the same happened during the rule of Uthman RA. Tha’labah ultimately died during the time of the rule of Uthman bin Affan RA in the state where he has yet to pay his zakat despite him trying several times. See Tafsir al-Thabari (no. 16987) al-Mu’jam al-Kabir Thabarani, (no. 7873) and Asbab al-Nuzul by al-Wahidi pg. 252.

Scholars Opinions Regarding this Story

This story is unauthentic according to what have been stated by scholars, among them are:

"Do whatever you like. The Garden is guaranteed for you."

Sahih al-Bukhari (3684) in the Book of Battle, Chapter the Prioritization of Those Who Participate in the Battle of Badar.

Let us all fulfil one of the pillars of Islam which is paying the zakat. The reason is our wealth is not ours in absolution, but in truth are Allah SWT’s and a part of it are actually the rights of our less fortunate brothers. Lastly, may Allah SWT make us from among those who always purify their wealth and property by paying our zakat and may Allah SWT accept our good deeds. Amin.