IRSYAD AL-HADITH SERIES 223: THE REWARDS OF PERFORMING DHUHA PRAYER IS A GOLD CASTLE? 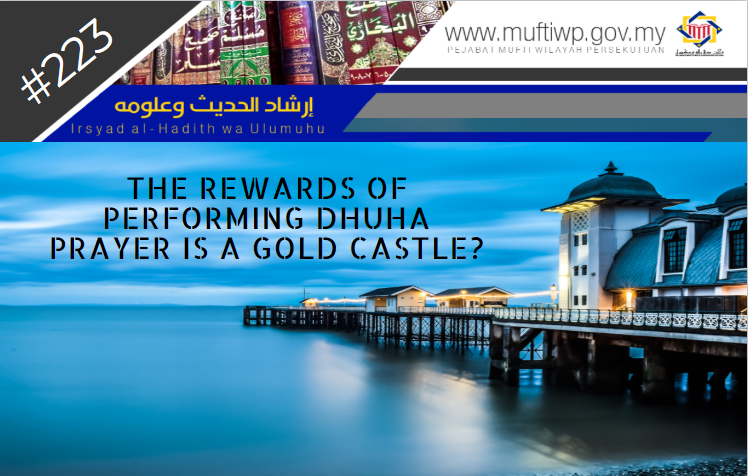 Is it true that there is a hadith which states that whoever performs 12 rakaat dhuha prayer will get a gold castle in paradise?

Dhuha prayer is one of the sunnah prayer which is greatly encouraged to be performed by every Muslim. It is also known as al-Awwabin prayer and its time starts after the sun rises. Furthermore, the Prophet PBUH advised Abu Hurairah RA to never leave Dhuha prayer:

“My friend (the Prophet (ﷺ) advised me to observe three things: (1) to fast three days a month; (2) to pray two rak`at of Duha prayer (forenoon prayer); and (3) to pray witr before sleeping.”

According to the above question, there is a hadith which narrates the advantages of those who perform 12 rakaat Dhuha prayer will receive a gold castle in paradise. This hadith is narrated by:

"Whoever prays twelve Rak'ah of Ad-Duha, Allah will build a castle made of gold for him in Paradise."

The following are some of the opinions of scholars regarding the status of this hadith:

Here, we would like to state that we are inclined to state that the hadith is dhaif (weak), however, it can be elevated to hasan when it is supported with several other narrations. Likewise, this is stated by al-hafiz Ibn Hajar al-Asqalani:

“However, if it is combined with the hadith from Abi Zar RA and Abi Darda’ RA, then it is strengthened and can be used as an argument.”

The Advantages of Dhuha Prayer

To conclude, it is a must for every person who believes in Allah SWT to perform the sunnah Dhuha prayer every day. The reason is it is one of the ways to showcase our gratitude to Allah SWT for all His blessings including the blessings of each joints in our body. Lastly, let us all try to perform the sunnah Dhuha prayer consistently in our daily lives, even if it is just 2 rakaat for this is more beloved by Allah SWT as narrated by Aisyah RA, where the Prophet PBUH said:

“The deed liked most by Allah is one to which the doer adheres constantly even if it is small.”