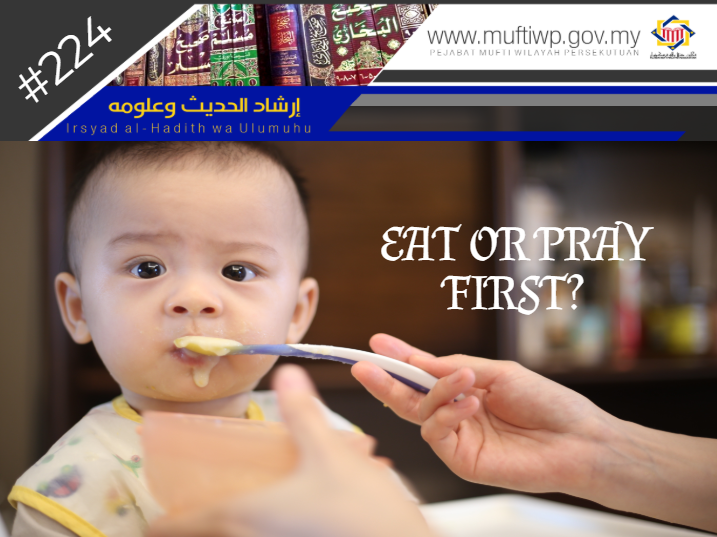 Is it true that there is a hadith stating that when the food is served then it is prioritized to eat first before we pray?

Prayer is one of the pillars of Islam which differentiates whether a person is a believer of a disbeliever as stated in a hadith. Thus, every Muslim should learn the rulings and matters related to prayer.

According to the above question, there is a hadith that mentioned it as so. Here, we include several narrations regarding it:

“If supper is served and the Iqama for (Isha) prayer is proclaimed, start with your supper first.”

“When the supper is brought and the prayer begins, one should first take food.”

Referring to the above two hadiths, it is clear that there is a commandment from the Prophet PBUH to eat first before praying. Furthermore, there are also narrations restricting one from praying when food is already served:

“No prayer can be (rightly said) when the food is there (before the worshipper), or when he is prompted by the call of nature.”

“The hadith is practised by scholars from among the companions of the Prophet PBUH which are Abu Bakar, Umar and Ibn Umar. This is the opinion of Imam Ahmad and Ishak. Both of them said: Start with eating even if it means you will miss the congregational prayer.” (See Jami’ al-Tirmizi, 184/2)

Al-Imam al-Nawawi commented on the above hadith in Sahih Muslim stating that:

“The hadiths are evidence that it is makruh (undesirable) to pray when food that he intended to eat is already served, for it would distract his heart to it (the food) and prevent khusyuk in his prayer. It is also makruh to hold one’s bladder and bowel movement. It should be understood that (praying when food is already served) will distract one’s heart and prevent khusyuk. Hence, the makruh ruling for it is in accordance with the majority of our scholars (Syafi’eyyah scholars) and others.” (See al-Minhaj, 46/5)

“When the food is served at the time for prayer, then it is sunnah to eat first before praying. The reason is, it will free one’s thoughts and lead to khusyuk. It is also sunnah to hasten one's eating for dinner or lunch.” (See al-Mausu’ah al-Fiqhiyyah al-Kuwaitiyyah, 189/27)

The Ruling of Praying When the Food is Served

In our opinion, it is makruh to pray when the food is served if there is still a long time before the time for prayer ends, and in this situation, it is sunnah for him to eat first as stated by Imam al-Nawawi in the above discussion. However, if the time for prayer is nearly at the end, then in this situation, he should first pray before eating the served food. Furthermore, Imam Ibn Qudamah said:

“Our colleagues (Hanabilah scholars) have said: Indeed, eating is prioritized over congregational prayer if the person is inclined towards the food (more than praying) and Imam al-Syafie agrees with this.” (See al-Mausu’ah al-Fiqhiyyah al-Kuwaitiyyah, 190/27)

The Status of the Narration

Before we end this discussion, here we include a famous narration which has the same meaning as the previously stated hadiths:

“When supper and isyak came, then start with supper.”

Hence, we are inclined to state that the narration of the hadith with the wording above is an unauthentic hadith. However, the narrations from al-Bukhari and Muslim are authentic. Thus, we cannot state that the particular hadith is from the Prophet PBUH.

To conclude, there are hadiths which state that it is prioritized to eat before praying if food is already served and there is still ample time to perform prayer. The reason is, someone should perform his prayer with khusyuk and a calm heart. Lastly, may Allah SWT accept all our prayers and make us from among those who always perform their prayers. Amin.