IRSYAD AL-HADITH SERIES 266: THE PROHIBITION AGAINST INSULTING OTHERS 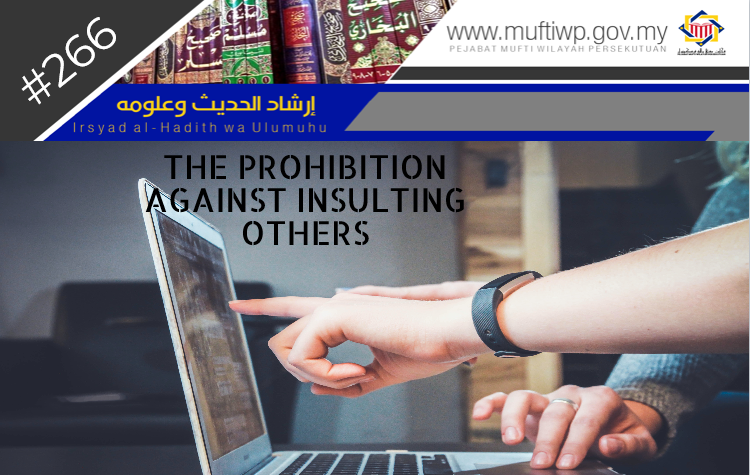 Is there a hadith related to the prohibition of labelling others saying that they are fasiq?

Islam encourages its followers to always speak of good things towards his fellow brothers, whether they are Muslims or non-Muslims. Allah SWT explained this in the Quran stating:

“And who is better in speech than one who invites to Allah and does righteousness."

Syeikh Wahbah al-Zuhaili Rahimahullah when commenting on the above verse said there are several important points which are the phrases invites to Allah and obey Him as well as does righteous deeds. Furthermore, the meaning of doing righteous deeds are fulfilling everything that have been made fardhu by Allah SWT on humans and avoiding everything that has been made haram by Allah SWT on him. (See Tafsir al-Munir, 228-229/24)

“…and he who believes in Allah and the Last Day, must speak good or remain silent."

According to the above question, there is a hadith which prohibits us from insulting or mocking our brothers with words such as fasiq and kafir.

"If somebody accuses another of Fusuq (by calling him 'Fasiq' i.e. a wicked person) or accuses him of Kufr, such an accusation will revert to him (i.e. the accuser) if his companion (the accused) is innocent."

Imam al-Hafiz Ibn Hajar al-Asqalani said, whoever accuses someone else saying that you are a fasiq or kufr and such accusation is false, then the accuser deserves to get what he accused (attribute) of. On the contrary, if the accusation is true, then this will not happen because what he said is the truth.

Furthermore, if a person said so with the intention of advising the other person or others by explaining it, then it is permissible. However, if the intention is to humiliate the person who is accused or introduce or inform others of the person’s bad attribute, then it is impermissible, for we are commanded to cover the misgivings of our brothers and teach and advise them with wisdom. Besides, as long as a person is able to give advice in a good manner, then it is impermissible for him to be tough because there is a concern that the person that is being advised may choose not to listen and continue with his ways. (See Fath al-Bari, 466/10)

This is strengthened with another hadith narrated by Imam Muslim:

“…and he who labelled anyone with disbelief or called him the enemy of Allah, and he was in fact not so, it rebounded on him.”

To conclude, as a Muslim, we should act the way that has been taught to us by Allah SWT and His Messenger PBUH in the hadith. The above hadith also teaches us about the strong prohibition against arbitrarily accusing our brothers with the words fasiq and kufr. The reason is, if it is a false accusation then the accusation would rebound back to us. Furthermore, we should avoid hurting others especially our brothers of the same religion. Lastly, may Allah SWT protect our tongues from saying anything that would hurt others. Amin.