IRSYAD AL-HADITH SERIES 273: THE ADVANTAGES OF DYING IN RAMADHAN 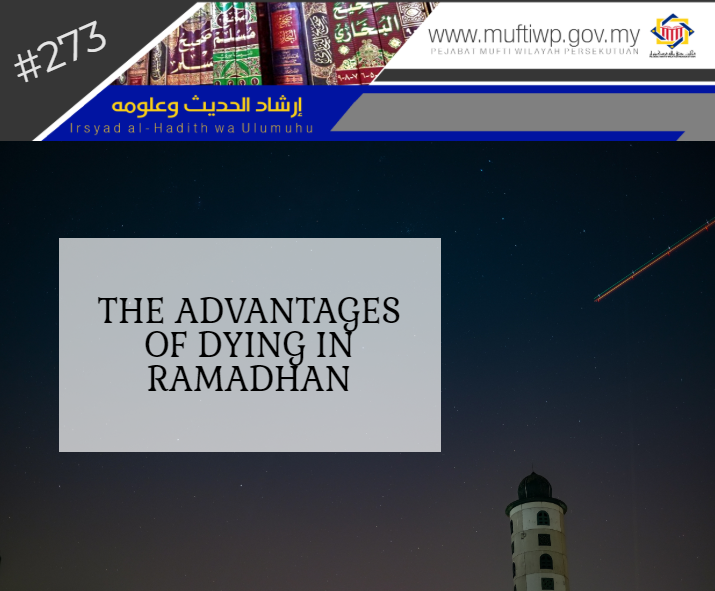 What are the advantages of those who die in the month of Ramadhan? Is it true those who died in Ramadhan will be placed in paradise?

Among the advantages of the month of Ramadhan are stated in sahih hadiths books such as the one narrated by Imam Muslim as follows:

Syeikh al-Izz bin Abd al-Salam in his book Maqasid al-Saum stated that the meaning of the gates of paradise is opened in this hadith is due to the immense amount of obedience performed in this month. While the gates of hell are closed because there are very few people who commit sins and transgressions in this month and the shayatin are chained means that humans are free from the disturbances of shaytan.

“Enter Paradise for what you used to do.”

Syeikh al-Sya’rawi when commenting on this verse said, this verse explains that Allah SWT will grant paradise as a reward to His servants who do good when he was alive, for he has followed the true manhaj or path. (See Tafsir al-Sya’rawi, 7897/13)

“And whoever fasts for a day seeking the blessings of Allah SWT and he ends his life with that worship, then he will enter paradise.”

This shows that whether a person who dies in the month of Ramadhan will be placed in paradise depends on his deeds.

Furthermore, if a person is fated by Allah SWT to die in Ramadhan or on other honoured days such as on a Friday or honoured places such as in the Holy lands, then it can be categorized as signs of husn al-khatimah (a good ending). Besides, our role as a slave is to always increase our good deeds and be istiqamah (consistent) in preparing ourselves to meet Allah SWT at any time. The mercy and compassion as well as forgiveness of Allah SWT are wide and not limited to certain times.

To conclude, we do not have the power to determine the place or time of our death for it is the rights of Allah SWT. We are commanded to always be prepared and increase our good deeds in this world so that these deeds that we bring with us could lead us to the paradise of Allah SWT. May Allah SWT bless us with a good ending of our lives. Amin.