IRSYAD AL-HADITH SERIES 274: STATUS OF THE HADITH REGARDING A VOICE IN THE MONTH OF RAMADHAN 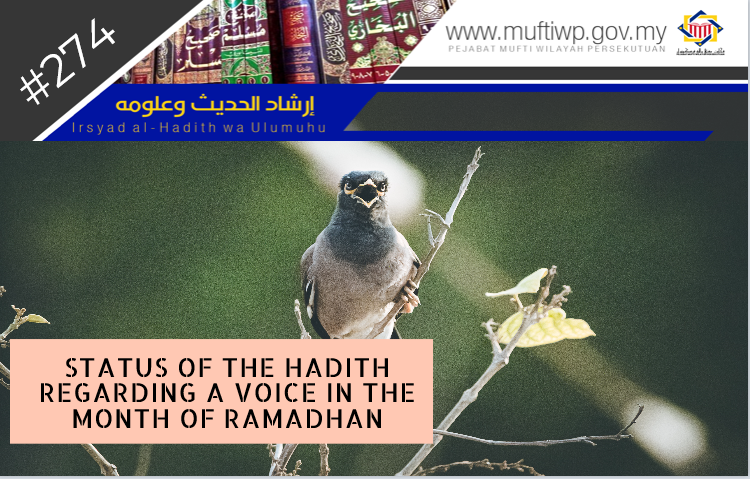 It is claimed to be from the Prophet PBUH:

“A stern voice will be heard in the middle of Ramadan on a Friday night. The horrible voice will surprise and wake the people who are sleeping and those who are standing will fall.”

In the honoured month of Ramadhan, there are special advantages and benefits that Allah SWT has prepared for His slaves of which the offer is not available in any other months. Hence, we would hear various hadiths narrated regarding the benefits of the month of Ramadhan.

According to the above question, the hadith or narration has different wordings. This narration can be found in the book al-Fitan by Nu’aim bin Hammad, Kanz al-‘Ummul by al-Muntaqa al-Hindi, al-Mu’jam al-Kabir by Imam al-Thabarani and in Mustadrak by Imam al-Hakim. Thus, here we include some matn (text) of the hadith regarding a voice in this month of Ramadhan:

“When a voice is heard in Ramadhan, then there will be chaos in Syawal.” (See al-Fitan oleh Nu’aim bin Hammad, 226/1)

It is claimed the Prophet PBUH said:

“A voice will be heard in Ramadhan.” They asked: “O Messenger of Allah PBUH will it be hear in the beginning, middle or the end of Ramadhan?” The Prophet PBUH answered: “No, it will only happen in the middle of Ramadhan when that night falls on a Friday, then a voice from the heavens will be heard.” (See al-Mu’jam al-Kabir, 332/18) [Imam al-Haithami in Majma’ al-Zawaid, 310/7 evaluated one of the narrators in this narration which is Abd al-Wahab bin al-Shahhak as a matruk (is narrations are left)]

Among the scholar who commented on this hadith are:

As for narrations from Nu’aim bin Hammad, here we cite the opinion of Imam al-Zahabi on him according to the book al-Fitan:

“It is impermissible for anyone to make an argument from it, he has arranged the book al-Fitan stating its oddities and falsehood.”

Considering the above opinions of scholars, thus, we are inclined to state that the hadith mentioning about a voice in the month of Ramadhan is unauthentic (fake) and we should never say it is from the Prophet PBUH nor should we spread or convey it to others unless to state its falsehood.

To conclude, this hadith is categorized as dhaif jiddan (very weak). Syawahid that supports it is also included in the same category and thus, could not strengthen the sanad of this hadith. Hence, hadiths such as these could not be made as an argument or even a basis in discussing matters of the unseen. The reason is matters that will happen in the future is included as matters of the unseen (ghabiyyat) and is unknown except what is stated through sahih evidences. Thus, we advise against spreading such as hadith in our society except when explaining its falsehood and only by people who has deep understanding and knowledge on the matter. Lastly, may Allah SWT protect us from conveying and spreading unauthentic hadiths. Amin.