IRSYAD AL-HADITH SERIES 275: LOOKING AT THE QURAN, THE FACE OF ONE’S PARENTS AND THE SEA CONSIDERED AS WORSHIP? 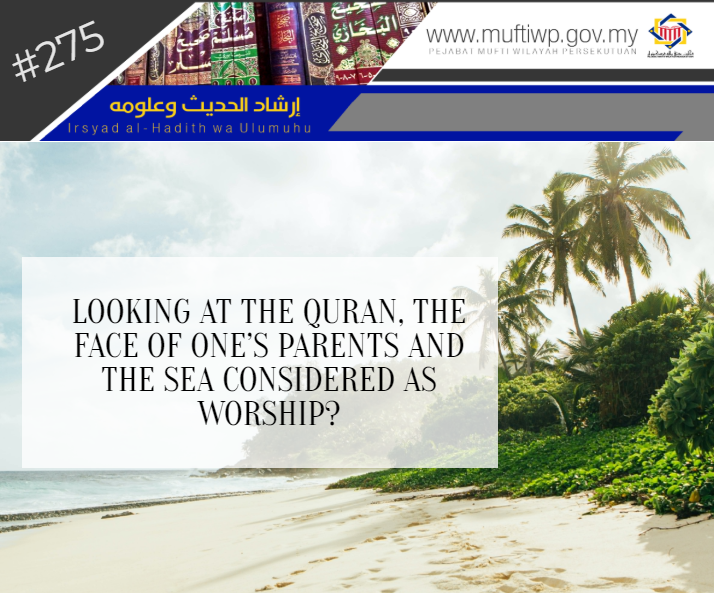 Treating your parents kindly is a commandment from Allah SWT and this is stated in most verses of the Quran. Among them is a statement of Allah SWT:

“Worship Allah and associate nothing with Him, and to parents do good, and to relatives, orphans, the needy, the near neighbour, the neighbour farther away, the companion at your side, the traveler, and those whom your right hands possess.”

Regarding the question presented, this hadith is mentioned by Ibnu Hajar al-Asqalani in al-Gharaib al-Mutaqitah Min Musnad al-Firdaus. He said:

In the same sanad, the hadith is also narrated by al-Dailami from the same Companion who is the Ummul Mukminin ‘Aisyah R.Anha:

This hadith is not narrated in any muktabar hadith books such as al-Kutub al-Sittah and others except in Musnad al-Firdaus.

Regarding the status of this hadith, it is a weak hadith. The reason is in the sanad of the hadith there is a narrator whose credibility is criticized. Among them is named Zafir. His real name is Zafir Abu Sulaiman al-Quhastani. Ibnu ‘Adiy said he is a weak narrator. He said:

“Generally, what is narrated by him cannot be used as a support and the hadiths he narrated are not written. Furthermore, Zafir is a weak narrator.”

To conclude, the hadith is weak. Furthermore, Musnad al-Firdaus is a book of a collection of weak and fake hadiths as explained by hadith scholars.