IRSYAD AL-HADITH SERIES 278: THE REWARDS OF SUBUH PRAYER IS THE SAME AS HAJJ? 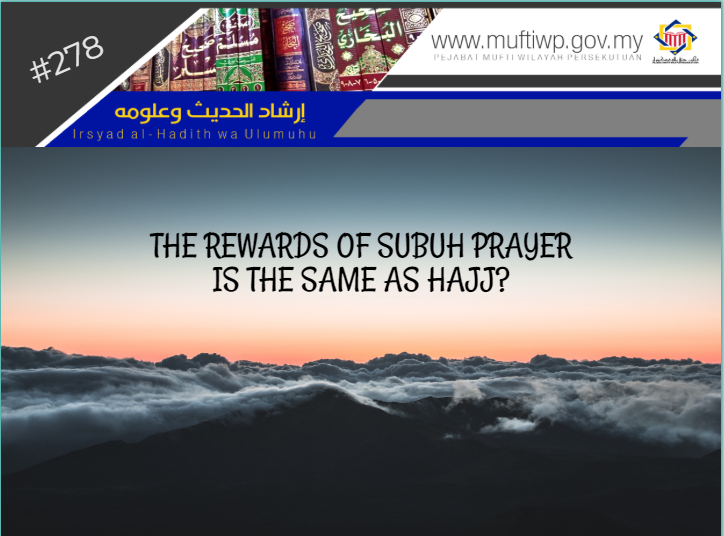 Assalamualaikum SS Dato’ Seri Mufti. What is the status of this hadith?

“Whoever perform the Subuh prayer in congregation, it is as though he has performed hajj 50 times with the Prophet Adam.”

There are certainly great rewards from Allah SWT as has been stated by Him for those who perform the Subuh prayer. Therefore, in a sahih hadith it is stated that for the hypocrites, it is one of the prayers that are difficult for them to fulfil. The reason is, it needs determination for humans to wake up from their sleep to perform Subuh prayer. This is stated by our Prophet PBUH in a hadith:

“The most burdensome prayers for the hypocrites are the 'Isha' prayer and the Fajr prayer. If only they knew what (reward) there is in them, they would come to them even if they had to crawl.”

Regarding the hadith in question, here we include the scholars’ opinion regarding the status of it:

Referring to the opinions of scholars, thus, we would like to state that the hadith is fake and it is not from the Prophet PBUH. Hence, we are prohibited from referring it to the Prophet PBUH and it is our responsibility to state its falsehood.

As a conclusion, undoubtedly there are great rewards for anyone who performs the Subuh prayer. Especially for those who managed to perform it in congregation. The reason is, there is a sahih hadith that states the rewards of congregational Subuh prayer, it is as the following:

Lastly, let us all put our best effort and determination to perform the Subuh prayer in congregation. May Allah SWT make us from among His slaves that maintain their prayers and among His successful slaves. Amin.