IRSYAD AL-HADITH SERIES 293: THE PROPHET MOSES AS PUNCHED THE ANGEL OF DEATH 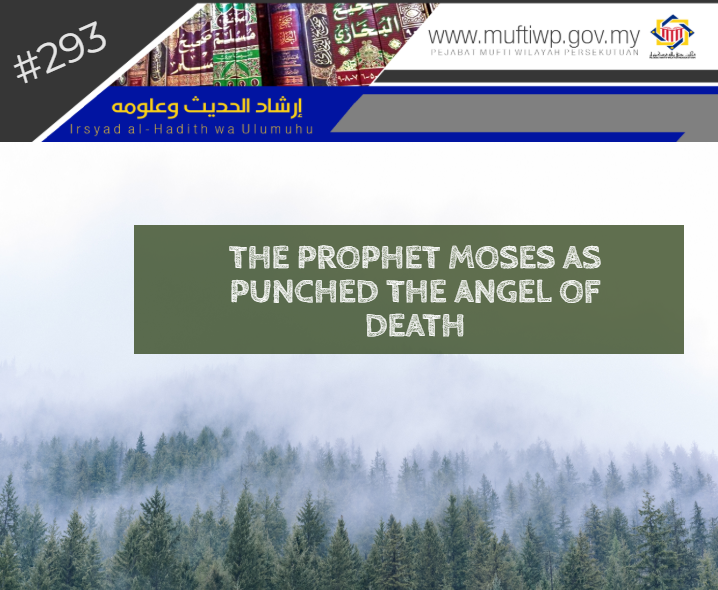 Assalamualaikum SS Mufti. I once heard a story that the Prophet Moses AS punch the eye of the angel of death because he doesn’t want to die yet at that moment. Is this story true and sahih? Hope for an explanation from ustaz.

The story is from a hadith in shih al-Bukhari narrated by Abu Hurairah RA:

The angel of death was sent to Moses and when he went to him, Moses slapped him severely, spoiling one of his eyes. The angel went back to his Lord, and said, "You sent me to a slave who does not want to die." Allah restored his eye and said, "Go back and tell him (i.e. Moses) to place his hand over the back of an ox, for he will be allowed to live for a number of years equal to the number of hairs coming under his hand." (So, the angel came to him and told him the same). Then Moses asked, "O my Lord! What will be then?" He said, "Death will be then." He said, "(Let it be) now." He asked Allah that He bring him near the Sacred Land at a distance of a stone's throw. Allah's Messenger (ﷺ) (PBUH) said, "Were I there I would show you the grave of Moses by the way near the red sand hill."

This hadith is narrated by Imam al-Bukhari in several chapters. Among them (is in the chapter of wanting to be buried near the sacred land) and (the chapter of the death of the Prophet Moses and what he said afterwards). The same for Imam Muslim who included this hadith in his Sahih book.

In short, the story of the Prophet Moses AS slapping or punching the face of the angel of death is a thabit and sahih hadith. The Muslims should accept this narration as stated by scholars who said:

“All Muslims accepts it (sahih al-Bukhari),”

However, does this story mean that the Prophet Moses AS refuses to die? Does this story depict a rough and violent person who dared to punch the angel of death’s face? How is it possible that an angel is harmed or injured by a human or does it mean that even an angel is just like another human who has a face and eyes?

This story in truth is not a narration about the Prophet Moses refusing to die. Those who misunderstood this narration would mock and degrade the Prophet AS. In fact, this is explained and answered by Ibnu Khuzaimah as cited by Ibnu Hajar al-Asqalani:

Imam al-Nawawi when commenting on the hadith cited the opinion of al-Maziri who said: Some atheists disagree with the depiction of this hadith saying: “How is it possible for Moses to cause injury to the angel of death’s eyes?” He presented several answers of scholars regarding this matter:

Second: This is a majaz incident. It means the Prophet Moses argued and debated with the angel of death. It is said “فَقَأَ فُلَان عَيْن فُلَان”. It means “So and so hit the eye of so and so” which means a person defeated another person with argument.

(Regarding this opinion), al-Maziri commented: In this matter, it contains the weakness for the Prophet PBUH said: “فَرَدَّ اللَّهُ عَيْنَهُ” (Then Allah SWT restored the angel’s eyes). When it is said that it means “restored means objecting his argument,” then this is taking it too far (difficult to be accepted). Thus, the meaning of eyes here is the physical eye.

Third: The Prophet Moses did not know that the man that came to him is an angel sent by Allah SWT. The Prophet Moses thought that it was a stranger who is a threat to his life that he had to defend himself by slapping the stranger. In defending himself, he accidentally popped the eyes of the angel.

This is the answer of al-Imam Abu Bakr bin Khuzaimah and some of the previous scholars. This is the opinion chosen by al-Maziri and al-Qadhi ‘Iyadh.

Regarding the Prophet Moses not knowing the angel of death, this is a common matter. The reason is an angel can morph into a human. This also happened to Mary. Allah SWT said:

And mention, [O Muhammad], in the Book [the story of] Mary, when she withdrew from her family to a place toward the east. And she took, in seclusion from them, a screen. Then We sent to her Our Angel, and he represented himself to her as a well-proportioned man. She said, "Indeed, I seek refuge in the Most Merciful from you, [so leave me], if you should be fearing of Allah." He said, "I am only the messenger of your Lord to give you [news of] a pure boy."

The same is stated when the Prophet Lot when two angels came to meet him before his people are punished:

And when Our messengers, [the angels], came to Lot, he was anguished for them and felt for them great discomfort and said, "This is a trying day." And his people came hastening to him, and before [this] they had been doing evil deeds. He said, "O my people, these are my daughters; they are purer for you. So, fear Allah and do not disgrace me concerning my guests. Is there not among you a man of reason?" They said, "You have already known that we have not concerning your daughters any claim, and indeed, you know what we want." He said, "If only I had against you some power or could take refuge in a strong support." The angels said, "O Lot, indeed we are messengers of your Lord; [therefore], they will never reach you. So, set out with your family during a portion of the night and let not any among you look back - except your wife; indeed, she will be struck by that which strikes them. Indeed, their appointment is [for] the morning. Is not the morning near?"

This means that an angel is able to morph into a man complete with eyes and face that it will be impossible to know that it is an angel unless one is told. This is strengthened by the words of the Prophet PBUH:

“And sometimes the Angel comes to me in the shape of a man and talks to me, and I understand and remember what he says.”

Likewise, we would also defend ourselves if we saw an intruder in our house. It may be a robber or a killer. If we are not careful, we could lose our lives.

To conclude, this is a sahih and thabit hadith from the Prophet PBUH. May Allah SWT increase our understanding in religion.