IRSYAD AL-HADITH SERIES 302: THE INTERPRETATION OF HADITH ON TASYABBUH (RESEMBLING / IMMITATING OTHERS) 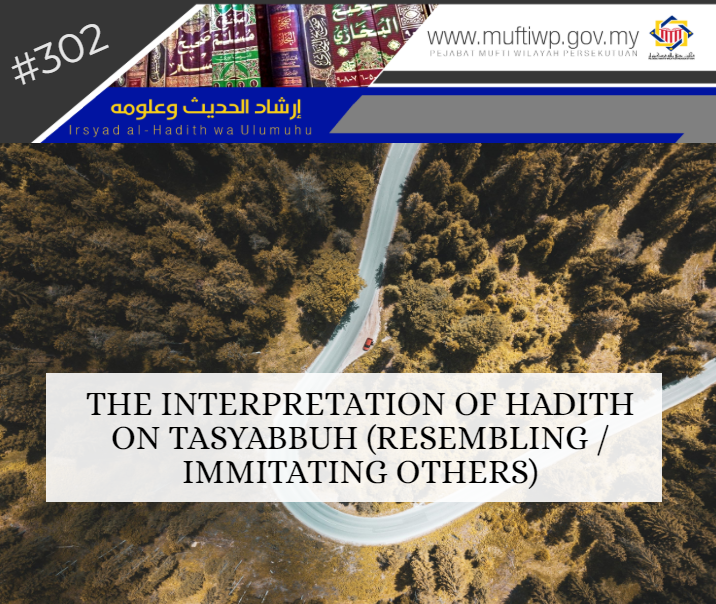 Can you please explain the hadith on tasyabbuh and its interpretation?

The Ruling of the Hadith

This hadith of Ibn Hibban has isnad (sanad) which is jayyid as mentioned in Iqtida’ al-Sirat al-Mustaqim (1/269) by Sheikh al-Islam and in al-Fatawa (25/331) mentioned that this hadith is jayyid. Imam al-Hafiz Ibn Hajar said this hadith is thabit and its sanad is hassan (good) in Fath al-Bari (10/282). Al-‘Iraqi said its sanad is sahih while doing takhrij upon this hadith in al-Ihya’ as stated in al-Mughni (1/359). Al-Zahabi said that its isnad (sanad) is salih (good) as mentioned in Irwa’ al-Ghalil (5/109) that its isnad (sanad) is hassan and all of the rijal are thiqah except Ibn Thawban where there is a disagreement on it.

Hence, we are inclined to the opinion which states that this hadith is thabit and sahih from the Prophet PBUH as explained by the scholars although there is a narrator who is evaluated as dhaif (weak) like Ibn Thawban.

The Meaning of the Hadith

Among the meaning of this hadith is as what is stated by the scholars which are:

We end the explanation on this hadith based on a hadith narrated by Ibn Umar R.Anhuma which states that the Prophet PBUH said with the meaning, whoever imitates the disbelievers like through clothing and other, the fasiq people, bad people, the Sufis, the pious and good people, then he is among them either inheriting the sins or good deeds. This is because, al-Thibi said that this is general towards all form of creation, behaviour and eminence.

May Allah protects us from imitating the sinners and those who receive the wrath of Allah, but make us from among those who imitate or resemble people who succeed. Therefore, hopefully, we will be successful like them. It is true the words of a famous poet, Imam al-Sahrawardi:

“Imitate even if you are unlike them. Indeed, imitating the glorious people is a glory

Lastly, we pray that we all be blessed with success and glory in the Dunya and the Akhira. Ameen.