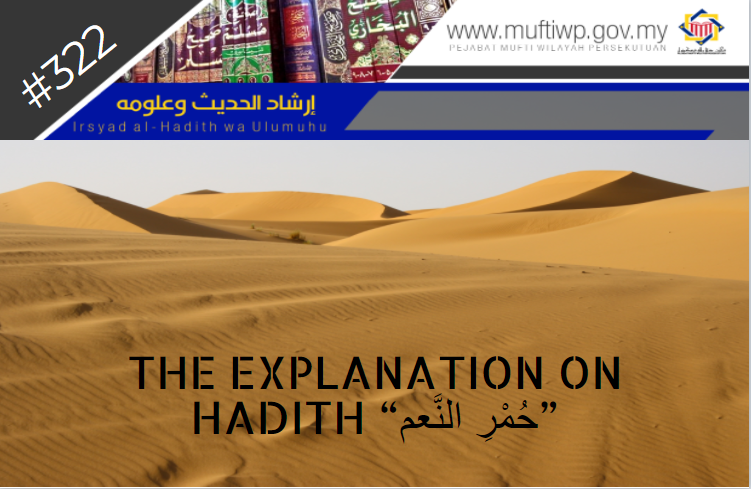 for by Allah, even if a single man is led on the right path (of Islam) by Allah through you, then that will be better for you than the nice red camels.

Al-Hafiz Ibn Hajar al-Asqalani said: The phrase (حمر النعم) means the best camel. Humruha (حمرها) means the most superior while the phrase na’am (النعَم) means camel in specific. It is said that al-an’am (الْأَنْعَام) includes cows, goats and even camels. From the phrase na’am (نعم) for them which means a number of camels and it can be pronounced with kasrah at the beginning, ni’am (نِعم). (See Fath al-Bari, 1/196-197)

The most correct pronunciation for the phrase (حمر النعم) is with damma at the ha’ letter and sukun on the mim letter (حُمْر) and its plural form is (أَحْمُر). While the phrase (النعم) is camel which is included under the idhafah sifat towards mawsuf. This kind of statement is to encourage others according to the Arabs. This is because (حمر النعم) is the most valuable property for them. So, kinayah (allusive) here means as if it is the best thing in the world because what we kept for the hereafter is something permanent. (See Tuhfah al-Ahwazi bi Syarh Sahih al-Tirmizi by al-Mubarakfuri, 2/439)

Hence, delivering da’wah until others change towards the better due to acquiring hidayah from Allah and it is caused by the one who delivers the da’wah, its reward is so immense. Truly what is said by Allah SWT:

And who is better in speech than one who invites to Allah and does righteousness and says, "Indeed, I am of the Muslims."

Ibn Kathir states it means one who calls towards tawheed in Allah and obeying Him whether through his words, actions and situations. The same for those who perform good deeds until he makes Islam as his religion and madhhab. Ibn Kathir also said: This verse is generally implied towards those who call towards good. (See Mukhtasar Ibn Kathir, 3/264)

While al-Zamakhsyari said: This verse is general to those who are gathered upon them three things:

These all will not take place unless towards those with knowledge who practice it correctly. (See al-Kassyaf, 4/156)

May Allah give us understanding to become a da’ie and loving good deeds. Ameen.