IRSYAD AL-HADITH SERIES 340: NEIGHBORS WHO LOVE TO INSULT OTHERS 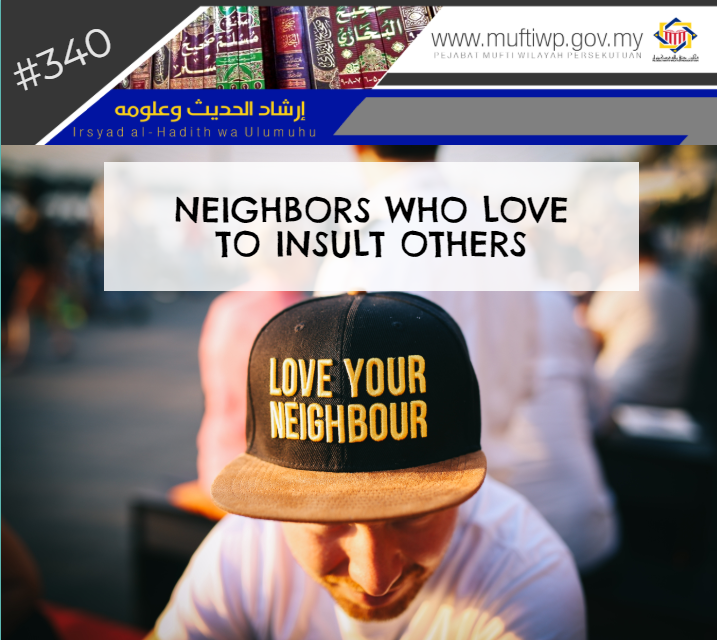 Is there a guide from hadith on neighbors who love to insult and censure my family? Or should we move out or be patient?

Worship Allah and associate nothing with Him, and to parents do good, and to relatives, orphans, the needy, the near neighbor, the neighbor farther away, the companion at your side, the traveller, and those whom your right hands possess. Indeed, Allah does not like those who are self-deluding and boastful.

Among the hadith which tells on the importance of doing good to neighbors are:

Narrated by Abi Syuraih RA, where the Prophet PBUH said:

Narrated by Ibn Umar RA, where the Prophet PBUH said:

Allah' Apostle said, Gabriel kept on recommending me about treating the neighbors in a kind and polite manner, so much so that I thought that he would order (me) to make them (my) heirs

Imam al-Nawawi cited the words of al-Qadhi ‘Iyadh that the meaning of this hadith is whoever being determined with the Islamic shari’ah will obey with the obligation of treating neighbors and guests kindly. All of this shows the importance of respecting neighbors’ rights as well as an encouragement to protect them. This is because Allah SWT advises us to do good to them through His saying in al-Quran as well as the Prophetic traditions. [See al-Minhaj ‘ala Syarh Sahih Muslim, 18/2]

The above are several hadiths which tell on the commandment to do good towards neighbors because the position of neighbors is high in this religion. According to the above question, we would like to cite a story happened during the time of the Prophet PBUH when a man came to him to report on his neighbors who love to wrong him:

It is narrated that Abu Hurairah RA said:

A man came to the prophet (May peace be upon him) complaining against his neighbor. He said: go and have patience. He again came to him twice or thrice. He then said: Go and throw your property in the way. So he threw his property in the way and the people began to ask him and he would tell them about him. The people then began to curse him; may Allah do with him so and so! Then his neighbor came to him and said: Return, you will not see from me anything which you dislike.

This hadith tells on the guide from the Prophet PBUH towards a man who was always wronged by his neighbor. However, the action or doing probably is a normal activity among the Arabs at that time but is not suitable to be done during this time. In addition, Imam Ibn Ruslan when commenting on this hadith stated that it is stated in this hadith on the virtue of being patient with neighbors even if the doings are done repetitively as well as trying to prevent it with all you might. Besides, this hadith also indicates on the permissibility to make du’a towards those who wrong others in loud recitation (clear voice) as a lesson to the said person as well as for him to abandon the doing. [See: Syarah Abi Daud, 440/19]

We are of the opinion in this issue, one who is wronged by his neighbor either through actions or words should first be patience. This is in accordance with prophetic guidance (hadyu nabawi) in the above hadith. Patience is a great attribute and loved by Allah SWT. Besides, one who is wronged should strive and put his best effort to settle his problem like give advice with hikmah, do good (ihsan) towards them even is responded wrongly, help them when in need, using the right channel to advice and others. Hopefully, these actions will soften their heart and they will stop to wrong him. Besides, du’a is also an important element which should not be neglected as only Allah SWT is the One Who may read and change one’s heart. If the questioned has put his best effort, to move from the place is the last resort for those who are capable to do so.

Punishment to Those Who Wrong Their Neighbors

There are several hadiths which state on the effect and punishment for those who like to wrong their neighbors:

It is narrated by Abu Hurairah RA that the Prophet PBUH said:

A man said to the Prophet PBUH: “O the Messenger of Allah, indeed, this woman is known with her obedience in prayer, fasting and giving sadaqah, but she always wrongs her neighbor through her tongue”. Then, the Prophet PBUH said: “She will enter the hellfire”.

According to both of these hadiths, those who like to wrong their neighbors either through actions or tongue (words) will be thrown in the hellfire even if they are among those who practice more acts of worship.

In conclusion, we are commanded to do good towards our neighbors because the commandment comes from al-Quran and the Prophet PBUH’s hadith. Besides, Allah SWT prepares a great punishment to those who like to wrong their neighbors. In addition, Islam teaches its ummah to always be patience towards everything befalling them as well as putting an effort to settle it properly. Lastly, may Allah SWT make us be among His servants who always do good towards the neighbors as well as being the residence of the Paradise in the hereafter. Ameen.