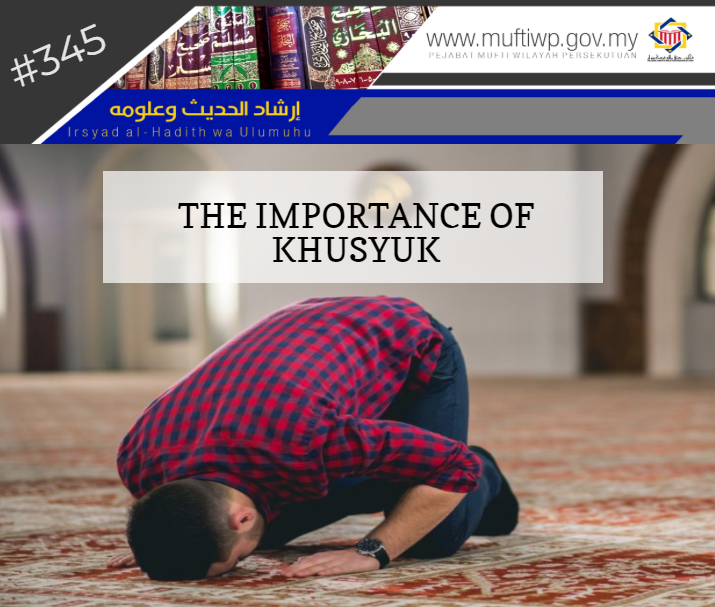 “If a person’s heart is in the state of khusyuk, so is all of his body,”

Khusyuk is included as sunnah hai’ah in prayer according to madhhab al-Syafie. As for the meaning of khusyuk, it means the presence of one’s heart during every recitation such as dhikr and supplication uttered by his tongue, thinking and contemplating on their meanings and feeling as though he is asking to Allah SWT.

In truth, khusyuk is something that should be continuous in prayer and prayer is invalid if a person’s heart is absent throughout the whole duration of the prayer, from the start to the end. (See al-Fiqh al-Manhaji, 96)

Maintaining khusyuk in all parts of prayer is sunnah for the completion and perfectness of the prayer. This is in accordance with a hadith from Uthman bin Affan RA: I heard the Prophet PBUH said:

“When the time for a prescribed prayer comes, if any Muslim performs ablution well and offers his prayer with humility and bowing, it will be an expiation for his past sins, so long as he has not committed a major sin; and this applies for all times.”

According to the above question, the above hadith is narrated by Imam Ibn Abi Syaibah and Imam Ibn Abd al-Razzaq in their musannaf. Furthermore, Imam al-Ghazali also places this hadith in his book. Among the scholars who evaluated this hadith or narration are:

Considering the above opinions and evaluations, we are inclined to state that the hadith is very weak for there is a narrator who is majhul (unknown). Furthermore, the accurate statement about the hadith is that it is actually the words Said bin al-Musayyib and not from the Prophet PBUH.

To conclude, the above hadith is very weak. However, the meaning from the hadith is sahih. The reason is what is apparent in a person’s actions is actually the sign of what is hidden in his heart. Lastly, may Allah SWT protect our tongues from lying in the name of the Prophet PBUH. Amin.