IRSYAD AL-HADITH SERIES 355: THE LOVE OF THIS WORLD IS THE PINNACLE OF EVIL 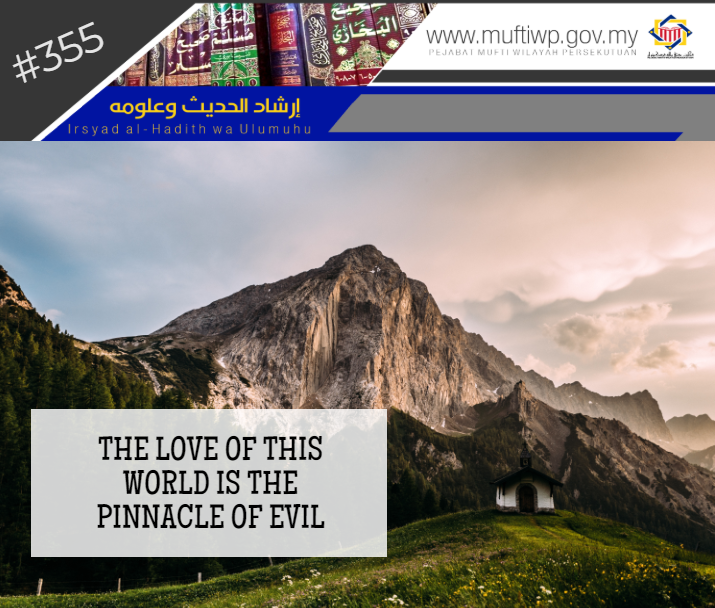 “Love towards this world is the height of evil.”

In the Quran, it is stated that this world is but a stopover for humans and it is a place of securing provisions to be brought to the everlasting place in the hereafter. This is in accordance with the statement of Allah SWT:

According to the above question, there is another narration that is similar to the above narration as cited by Imam al-Baihaqi but it is referred to be from the Prophet Jesus AS:

Furthermore, this narration is also referred to Malik bin Dinar as cited by Imam Ibn Abi al-Dunia and it is also said to be the words from Jundub al-Bajaliy who is one of the companions of the Prophet PBUH. (See al-Asrar al-Marfu’ah, 179-180/1). Thus, here we present the opinions of the scholars regarding this hadith:

After considering the above opinions, we can conclude the narration is not from the Prophet PBUH but a statement from al-Hasan al-Basri and the status of the hadith is mursal. As for the ruling of mursal for this hadith, we have written about it in Irsyad al-Hadith series 147.

To conclude, the hadith is mursal and the sanad is not connected to the Prophet PBUH. Lastly, may Allah SWT give us understanding in this religion and protect our tongues from any deception in the name of the Prophet PBUH. Amin.