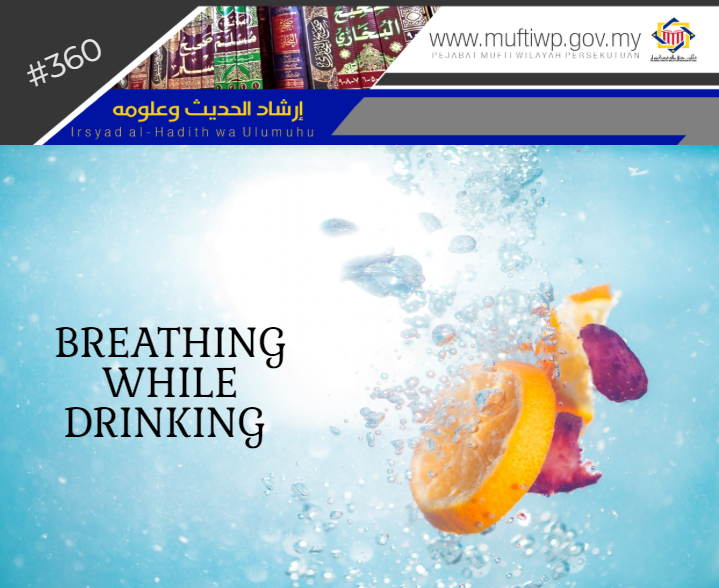 Assalamualaikum SS Dato’ Seri Mufti. Is there a hadith that restricts someone from drinking water in one breath?

Islam is a perfect religion where it encompasses all aspects of humans’ lives from the smallest of things to the biggest of things. Furthermore, the Prophet PBUH himself is a very special human for he is responsible to teach his ummah everything that was revealed to him.

Referring back to the question asked, here we include a sahih hadith from Imam Muslim explaining the manners and etiquettes of drinking water, although there are numerous other hadiths that describe this matter. Some of them are:

Imam al-Nawawi placed the above hadith under the chapter that it is sunnah to breathe outside of the vessel and it is makruh (undesirable) to breath inside a vessel. Moreover, this hadith means that by practising the actions of the Prophet PBUH it will protect us from thirst and diseases resulting from drinking in one breath. (See al-Minhaj Syarah Sahih Muslim, 198-199/13)

“Indeed, the restriction is from breathing inside the vessel while drinking. As for someone who does not breath (inside the vessel), then he can drink in one breath if he wishes to.” (See Fath al-Bari, 93/10)

Furthermore, there is wisdom behind the restriction, as stated by Imam al-Qurthubi:

“The restriction of breathing inside a vessel while drinking is to prevent the vessel and water inside of it from being polluted with saliva or any foul smell.” (See Fath al-Bari, 94/10)

Moreover, there are scientific researches that prove to breathe inside the vessel while drinking is a bad habit and could lead to health problems.

As a conclusion, we as Muslims should obey and uphold everything that is commanded by the Prophet PBUH, for it is what has been sanctioned in our religion. May Allah SWT give us the strength to practise the sunnah of the Prophet PBUH and protect us from bad deeds which are frown upon by Allah SWT and His Messenger. Amin.