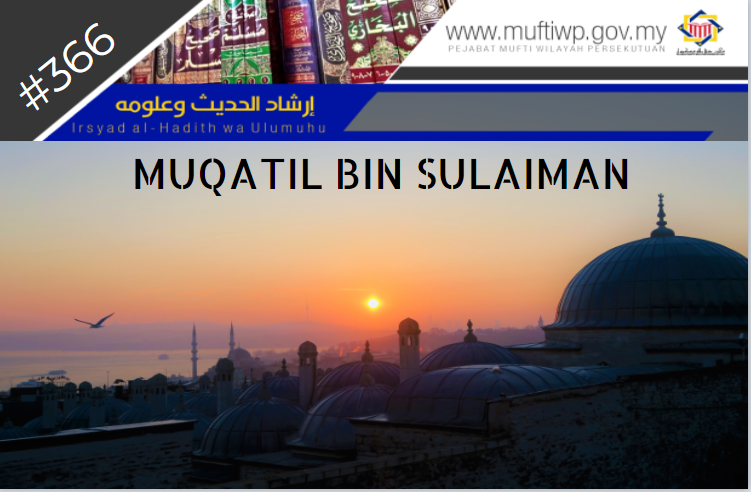 Reviewing the history of Muslim scholars will motivate a person to learn and it could more or less be a lesson for us so that we can follow their commendable attributes and character to apply in our daily lives. According to the above question, in this series of Irsyad al-Hadith, we will briefly narrate the background and life of a renowned Muslim scholar, Muqatil bin Sulaiman.

His name is Abu al-Hasan Muqatil bin Sulaiman al-Balkhiy and he is a great commentary scholar. Furthermore, he is a narrator of a famous hadith munkar. He narrated from al-Dhahhak, Mujahid, al-Zuhri and Ibn Buraidah. As for those who narrated from him are Abdul Razzaq, Haramiy bin ‘Umairah, Ali bin al-Ja’d and ‘Isa bin Abi Fatimah.

Waqi’ was asked by a man regarding the commentary made by Muqatil. Waqi’ replied: “Don’t refer to him.”. Then, the man asked Waqi’ again: “What should I do with it (the commentary book) then?”. Waqi’ answered: “Bury it (his commentary book) for he is a person who lies.” (See Tahzib al-Asma’ wa al-Lughat, 2/111)

The Status of Narrations by Muqatil

Among the scholars who evaluated the narrations by Muqatil bin Sulaiman are:

One day, when Caliph Abu Ja’far al-Mansur was appointed as the caliph, Muqatil went to meet him.

The caliph then said to him: “Advise me O Muqatil.”

He answered: “Do you wish for my advice from what I’ve seen or what I’ve heard?”

The caliph said: “From what you see.”

Muqatil then said: “O Amir al-Mukminin! Caliph Umar bin Abdul Aziz had 11 children. He left the inheritance of 18 dinars; 5 dinars for the cloth for his shroud and 4 dinars for his burial. The rest 9 dinars was divided into his 11 children. Afterwards, Hisyam bin Abdul Malik (the next caliph) passes away and he had 4 wives. Each wife is left with 80 thousand dinars and the total for all his wives were 320 dinars of which it was only 1/8 of his whole inheritance that he left.”

This story is recorded by Imam al-Sya’rawi in his famous commentary when he commented on a verse in surah al-Maidah. (See Tafsir al-Sya’rawi, 6/3421)

Among the lessons that can be taken from this story is that leaving a huge amount of wealth does not guarantee a prosperous life for one’s children after his death. The reason is all of these materials are temporary and what’s important is to leave children or heirs who are pious and have taqwa to Allah SWT which is far better than anything else.

To conclude, Muqatil bin Sulaiman is one of the Muslim scholars who contributed in his own way. However, his narrations are rejected as explained above. Lastly, may Allah SWT give us understanding and strength in following the commendable attributes and character of our previous scholars. Amin.