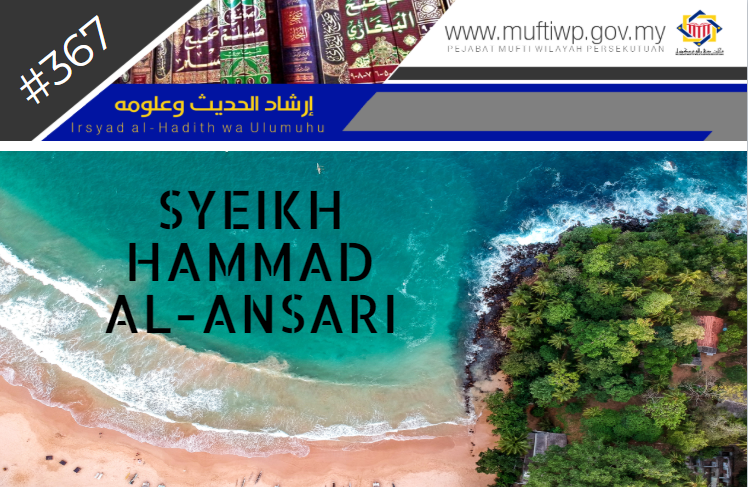 In this series of Irsyad al-Hadith, we will recount the story of a scholar who has contributed greatly in the field of hadith as stated by his child in al-Majmu’ fi Tarjemah al-‘Allamah al-Muhadith al-Syeikh Hammad al-Ansari. The reason is through the stories of these scholars, it depicts how great their contributions are and this would indirectly motivate the person reading them to learn or study. The chosen scholar in this series is Syeikh Hammad al-Ansari.

His name is Hammad bin Muhammad al-Ansari al-Khazraji al-Sa’di which refers to Sa’ad bin Ubadah who was the companion of the Prophet PBUH. He was born in 1343 Hijrah in the state known as Tad Mecca (تاد مكة). It is said that since young, Syeikh has always loved knowledge.

Furthermore, he lived with his uncle who are called as the sea for his vast knowledge and great understanding in certain matters. He also had memorized the Quran by the age of 8 years old and learn the prerequisite knowledge, hadith and numerous matan or manzhumah before he reached the age of rusyd (rationality). Furthermore, he also memorized al-alfiyah of Imam al-Suyuthi, Jam’ al-Jawami’ by al-Subki, al-Mu’allaqat and others.

He travelled out of his state and migrated due to the colonization of France. When he was 21 years old, he started to head to al-Haramain and this is where he attended halaqah (classes) in the Holy Mosque. Among his teachers are Syeikh Hamid al-Faqqi, Syeikh Abdullah al-Masyyath, Syeikh Muhammad Amin al-Halabi and he continued attending the halaqah until he was given permission from Syeikh Abdullah bin Hasan Ali Syeikh to teach in the Holy Mosque.

Afterwards, he moved to Medina and had a chance to learn from several teachers at Dar al-‘Ulum. Among them are Syeikh Muhammad al-Hafiz, Syeikh Umar Barri, Syeikh Abduh Khudai’ and many more. Then, he returned to Mecca. During a hajj season, he met Syeikh Abdul Latif bin Ibrahim and Syeikh Muhammad bin Ibrahim Ali al-Syeikh. Both these Syeikh encourage him to go to Riyadh and he went there to become a teacher in Kuliyyah Syariah (Faculty of Shari’a) before moving to Ma’had Imam al-Dakwah al-‘Ilmi. After working at the Ma’had, he returned to Kuliah Syariah before he was transferred to Medina.

His love for knowledge and his students is apparent for Syeikh Hammad al-Ansari. This is proven for he spent most of his time studying and he is a reference for most scholars and students. Besides, his library became the favourite place for knowledge lovers for it is filled with reference books from various fields of knowledge. Moreover, he also loves to collect old manuscripts especially in the field of hadith and he also wrote several books related to hadith for people who love knowledge. It is said that there are more than three thousand volumes of his books and the majority of them are in the field of hadith.

Furthermore, with his competency in various fields, several beneficial books were authored. Among his books are:

There are many more that he wrote and his books are still benefiting students of knowledge to this day.

Among his words are:

“Every time I wrote a manuscript, I would copy it.”

“When I was a teen, I read and write until the sun rises. And I would not sleep except for a little while during zohor.”

“I’m not a mufti but just a servant of the seekers of knowledge.”

“We would not learn something new unless after we have memorized it.”

Among his will and wise words are:

“I observe that students nowadays are lazy to review and study among themselves.”

“Take the book of Ibn Jama’ah on the Manners of Listening and Students and every day read a chapter from it.”

“The scholars should talk to others about what they are able to contemplate about and don’t make them into unbeneficial matter.”

Thus, is the brief background of the scholar named Syeikh Hamamd al-Ansari. He died on a Wednesday equivalent to 21 Jamadi al-Akhir 1418 Hijrah after falling sick for several months. A great number of students and scholars pray over his body in al-Nabawi al-Syarif mosque after the Asar prayer and the imam who lead the funeral prayer was Syeikh Abdul Bari.

To conclude, Syeikh Hammad al-Ansari is one of the hadith scholars who has greatly contributed for this religion especially in the field of hadith where until today, his books are the reference for others and placed in Muslim libraries. May Allah SWT bless him and make us from among his slaves who contribute to our beloved religion, Islam. Amin.